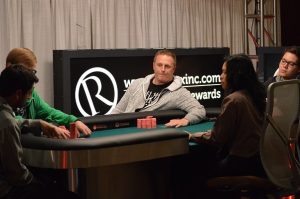 The Borgata in Atlantic City hosts some of the biggest poker tournaments in the northeastern United States every year, and spring is the time when some of the most notable take place.

This coming week will see the World Poker Tour’s World Championship come to the casino, but before that could begin, the Borgata Spring Poker Open had to wrap up by holding a main event of its own.

The Borgata Spring Poker Open Main Event was won by tournament veteran Brian Lemke, who finished first in a field of 447 entries to win $276,949.

Lemke has never been a household name in the world of poker, but he’s had more than his share of success over the course of his career.

He has won six-figure tournament scores on four separate occasions, none more significant than winning $692,690 and a gold bracelet by taking down a $5,000 buy-in No Limit Hold’em event at the 2009 World Series of Poker.

Lemke has been successful in the past at the Borgata, too.

Until this win, his second biggest score had come in a win at the 2012 Borgata Spring Poker Open, a victory that scored him over $111,000 in prize money.

This time around, he would need to navigate a final table that included a couple of well-known poker pros in order to secure another title.

Perhaps the most dangerous was Joe Kuether, who had already won more than $1.2 million in tournament earnings in 2015, and is currently ranked 16th in the world by the Global Poker Index.

Justin Zaki, a regular at the WSOP and on the World Poker Tour, also came into the final table with over $1.3 million in career earnings.

But those two were the first to fall, leaving Lemke to play four-handed. A critical hand took place at that juncture, as Lemke shoved with A♣J♠, only to find out he was up against the A♠K♥ of Ben Zamani, the second-biggest stack at the table.

It looked like Zamani, who once scored a $1 million cash in the Main Event at the PokerStars Caribbean Adventure, was set to double through Lemke after a safe flop.

But a jack on the turn was enough to give Lemke the lead, and the river did not change the situation, eliminating Zamani and giving Lemke a huge chip lead.

Andy Spears then eliminated James Gilbert to set up the heads-up match that would decide the tournament. Lemke had a slight chip lead, holding 8 million chips compared to 5.4 million for Spears.

It appeared as though there might be plenty of play, but in the end, the heads-up duel lasted just two hands: so quick, in fact, that the Borgata’s website apparently didn’t have time to report on exactly what happened during the final hand.

The tournament victory was an impressive one for Lemke, who brought his career earnings to more than $1.55 million, but Spears’ result was notable as well.

The $159,886 he took home for second place was the largest cash in his career and the third of the Borgata Spring Poker Open for him, taking his lifetime live tournament earnings to more than $546,000.