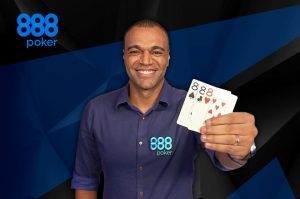 888poker and Denilson are now a team after the former announced a deal with the latter earlier this week.

Denilson is a retired Brazilian soccer player who competed for 16 years at the highest level and won a World Cup medal for his country, but since hanging up his boots he’s become something of a poker fan.

Following in the footsteps of other Brazilian soccer stars who have taken up the game in recent years, such as Ronaldo and Neymar Jr (both are currently sponsored by PokerStars), Denilson is now looking to satisfy his competitive urges at the felt.

As part of his new deal with 888poker, Denilson will work with fellow Brazilians and current team pros Bruno Kawauti, Bruno Politano, and Nicolau Villa-Lobos.

Much like the coaching Rafa Nadal received when he was a member of Team PokerStars, Denilson will learn from 888poker’s team of pros in a bid to take on the world’s best on the live circuit.

Although he already has some experience with the game, Denilson’s relationship with 888poker will see him enter into a variety of live tournaments where the overall skill level will be a lot higher than he’s used to.

Regardless of his lack of experience in poker, the Brazilian is looking forward to testing his mettle and representing 888poker.

“Many of the qualities you need to be a successful footballer can help you improve your poker game. I hope it will help develop my own pokers skills as well as encourage new players to get involved in this exciting game,” said the soccer star.

Of course, this isn’t the first time that 888poker has worked with a professional soccer player. Back in 2014 the operator inked a deal with Uruguay’s Luis Suarez but quickly terminated his contract after he was involved in a biting incident at the 2014 World Cup.

While 888poker will be hoping to avoid a similar incident this time around, it’s worth noting that the poker landscape is different today than it was when the company signed Suarez back in 2014.

During that time his signing was seen as something of a novelty, but in today’s climate of appealing to new demographics it’s almost become a necessity to have a high profile sports star on the team.

888poker traditionally had Shane Warne to fill this void, but after he chose to part ways with the company in 2015 it left the door open for another sportsman to enter the fray.

With Denilson now wearing their corporate colors, 888poker will be hoping to tap into the soccer player’s public profile to bring a wave of new players into the mix over the coming months.