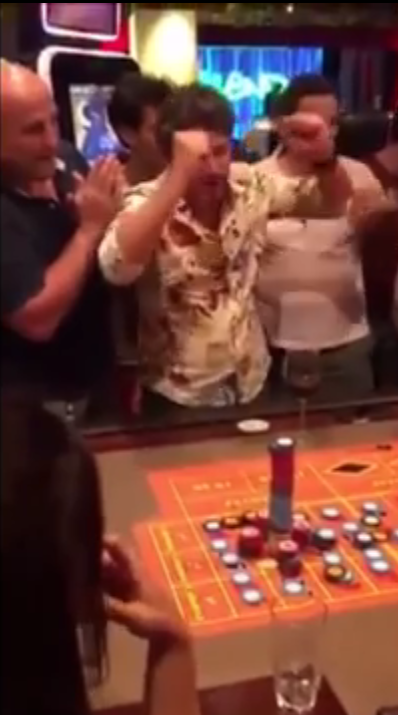 An already very wealthy gambler from Brazil won $1,225,000 on one spin of the roulette wheel at a casino in Uruguay just after New Year’s. Pedro Grendene Bartelle, a billionaire businessman, brought some friends and $35,000 to the casino at Hotel Conrad for what would turn out to be a memorable evening on the night of January 3.

But Bartelle didn’t gamble the money away the traditional way (i.e. betting on red or black). Instead, he took a huge risk, placing a bet with 35-1 odds that is one-in-38 to hit. And hit he did, big-time.

He chose number 32 and put his entire stack on the line. With a video camera recording the spin (see clip below) and a group of his friends at his side, Bartelle watched the ball land on his number. He then locked arms with his friends and they all jumped up and down simultaneously in celebration.

The businessman comes from wealth, so this money isn’t life-changing for him. In fact his uncle, Alexandre Grendene Bartelle, is the richest man in Brazil. Pedro is the president of a successful shoe company. The wager took place January 3, but was only recently (and incorrectly) reported in the foreign press.

An oversight in converting Uraguayan pesos to pounds, euros, and dollars was picked up and regurgitated by numerous new sites, although readers quickly caught the errors.

There are a total of 38 numbers on a roulette wheel. Players can bet on individual numbers, all odd/even numbers, red or black numbers, and a few other options. Bets on which color the ball will land on, for example, are less risky and have a lower reward than if a player wagers on an individual number, which is what Bartelle did.

Poker is a game of risk. That means many poker players aren’t afraid of risk, much like Bartelle’s ballsy mentality.

Take Qui Nguyen, for example. The 2016 WSOP Main Event champion is an avid gambler. He hasn’t been known to put $35,000 on one lucky roulette number. But he was as much a casino gambler as he was a poker player before winning the most prestigious tournament in the world.

Poker and roulette are similar in that it takes some guts to win big. There is no skill factor in roulette, however. But to win a poker tournament such as the Main Event, you need the same kind of luck Bartelle had to be on your side. Nguyen, given his lack of major tournament experience, was a longshot just to finish in the money, let alone scoop the whole thing. But win he did.

Me and my buddy Kenny witnessed something like this first hand one night while hanging with a high roller we met at “The Resorts” who owned a bunch of bars in NYC. We started the night watching George Foremens Son “Monk” and also Michael Spinks Son fight. Anyways the guy befriended me and my buddy while watching the fight and we kind of became one of the posse as he invited us both to hang with him and his Secretary if thats what you want to call it. Anyways we hung with this guy at the Club Boogie Nights and then he told us to follow him back down since he was going to hit Roulette. The first hand he scattered a bunch of 1k bets on numbers and he missed them all losing close to 15k. Then his secretary went over and whispered something to the pit boss since they closed the table down for him and him only. Next thing you know I hear his secretary say out loud “Number 17 is going to hit right?” directly to the pit boss. Me and my buddy Kenny look at each other still buzzing from the Grey Goose drinks while a frenzy behind us also started dropping 100’s of dollars on 17. Guess what hit on his 15k single number bet number 17 35-1 odd payout. The table was once again shut down and the pit boss requested a payout tax for for the high roller. So ask yourself is this really coincidence or do these guys really get that lucky. All I know is I sure wish me or Kenny would of loaded up on 17 that night..I will never forget that crazy night in Atlantic City as long as I live..