A former November Niner, a lifetime $5 million winner, and a WSOP bracelet holder all made the final table for the Seminole Hard Rock Poker Open Championship event. But no one was able to outlast Brandon Eisen, an accomplished but relatively unknown grinder who left with $771,444, nearly doubling his lifetime tournament winnings. 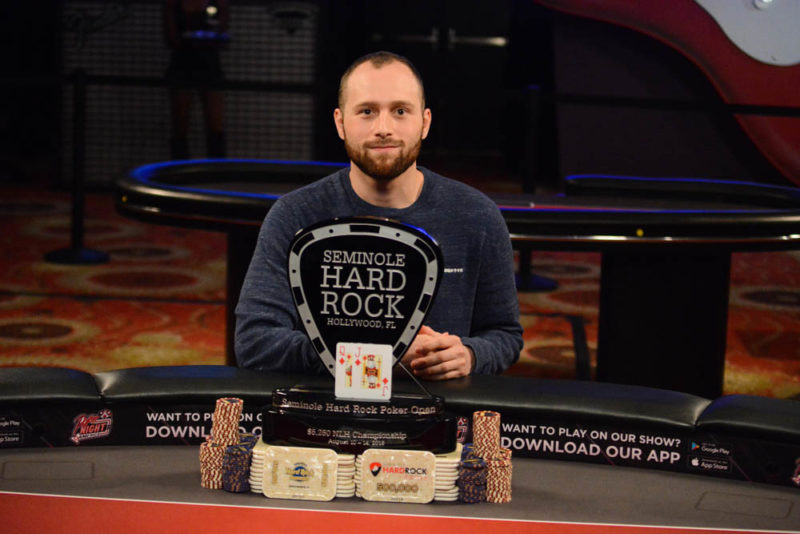 The Seminole Hard Rock Hotel in Hollywood, Florida, considered by many one of the best poker rooms east of Las Vegas, will host another major series, the Rock n’ Roll Poker Open, starting Nov. 14.

The 2018 SHRPO Championship event had 914 entries, generating a $4.4 million prize pool. Many top pros, including local legend Jason Mercier, were among the 115 players who cashed.

Notable Players in the Money

Tough competition continued when the final table began. Just about everybody there had an impressive poker record. Joe Cheong, 3rd place finisher in the 2010 WSOP Main Event, was quick to exit in 8th place after losing a tough hand to Jeremy Ausmus, and he had less than kind words for his fellow November Niner.

A10o < KJo aipf to the douche @jeremyausmus 8th. First 6fig score of the year at least

Heads-up play lasted longer than it took to go from nine players down to two. It took just 61 hands to lose the first seven final table players. But getting rid of the last one took an epic heads-up battle between Ausmus and Eisen, capping off for Eisen what has been a five-year tournament grind.

Ausmus and Eisen each had more than 100 big blinds when heads-up play began.

It wasn’t until the 84th hand between the two of them when Ausmus put his remaining 19-big-blind stack in preflop with K-5 against Eisen’s Q-J. Ausmus lost the tournament when Eisen hit two-pair.

Eisen has an impressive up-and-coming poker resume that began five years ago when he won a $200 Venetian Deep Stack for about $6,400. He followed that up with a 2nd place finish at the Venetian in a $300 for another $4,400.

From there, Eisen, who hails from Millani, Hawaii, would go on to add 46 more tournament cashes to his Hendon Mob page for $744,868 in winnings.

But with his 49th career cash, the SHRPO Championship, he Eisen brings his lifetime winnings up to more than $1.5 million, which makes him the all-time winningest Hawaiian in the history of poker.

Eisen roughly doubled his career tournament cashes with the win, having previously notched three six-figure scores — the best of those $283,895 for third place in the 2014 Little One for One Drop — but never managing a big win.