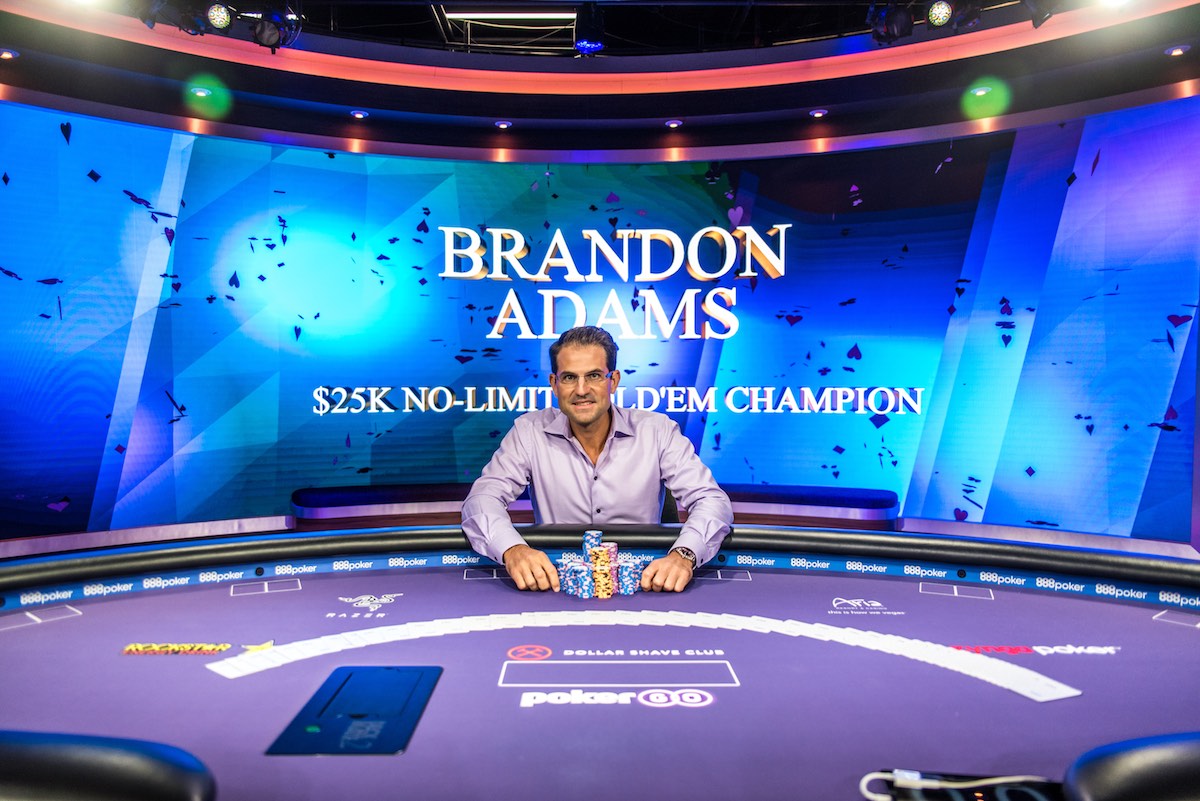 Ivey Leaguer Brandon Adams had a good weekend in the Poker Master series at the Aria in Las Vegas, winning a combined $469K in two key events. (Image: PokerGo)

The player who accumulates the most points throughout the seven-tournament series wins a slick purple jacket. Last year’s champion, Steffen Sontheimer, has yet to cash in two events.

Adams then registered for Event #2, the $26,000 No-Limit Hold’em event on Saturday. By the end of Day One, he had the chip lead heading into Sunday’s final table.

Jared Jaffee seized control of the lead early on at the final table. But it was short lived as Daniel Negreanu, holding pocket tens, moved all-in and ran into Adams’ pocket queens. The board ran out blanks for Kid Poker, the 6th place finisher ($75,000).

Despite entering the final table with the chip lead, Adams was quickly reverted to being fairly short-stacked. But he patiently waited for opportunities to rebuild and before long, he was back out in front — only to tumble back to being the short stack again.

The blinds had gotten so big at this point that the player who ran the hottest was going to win. It was that simple. And that stroke of good fortune fell to Adams.

Luck was definitely on the Harvard economics lecturer’s side in the sickest hand of the day against Jaffee. Adams got his remaining chips all-in with rockets against Jaffee’s flopped set. A runner-runner full house gave Brandon the nuts after getting his money in with a two percent chance of winning for a brutal defeat for Jaffee.

The suck out left Jaffee with less than 20 big blinds. But he was able to outlast Schindler, who lost a flip to Adams to bust in 3rd place for $175,000.

That set up an unfavorable heads-up match for Jaffee, who began at a 5-1 chip disadvantage.

It took just two hands for Adams to finish off his opponent. He won yet another flip to end the second Poker Masters event of the year and earn $400,000. Jaffee went home with $262,500.

The prof wasn’t in denial about how much luck played in his smashing down his opponent.

“Well, I don’t know if you watch the table, but I did get really lucky at one point,” he told Maria Ho with a smile as he looked over at Jaffee. “It’s always nice. I’ve had my share of tough beats but I’ve never experienced anything like that, drawing so thin there. Hitting the runner-runner, that was insane. So, I ran good.”

Proving that even Harvard grads sometimes forget the difference between an adverb and an adjective.

Adams’ run propelled the former Full Tilt pro to the top of the Poker Masters leaderboard with 420 points. He has a 120-point lead over David Peters with five events remaining.

That’s pretty disgusting to lose such an important pot to runner runner at 2% probability. That would tilt me for weeks if it happened to me. He is clearly playing some great poker though and we all need to ride our luck at some point to take down a big tournament.