New York State’s approval of online sports betting in April has prompted one of the largest grey-market sites serving the state to announce its exit from the jurisdiction later this month. As of June 21, 2021, according to an email to its New York players, Bovada will end all of its New York-facing services, including online sports betting, online poker, and online casino gambling.

Bovada Poker’s familiar stylized “B” will soon disappear from the computer screens of its New York-based players. (Image: bovadapoker.eu)

The voluntary withdrawal continues Bovada’s recent tradition of exiting most US states where online gambling of the type it offers has been legalized and formally regulated. With the pending withdrawal from New York, Bovada will have ceased offering its services to at least five US states, also including Maryland, Delaware, Nevada, and New Jersey.

Bovada cited the “future climate for online gambling in the state of New York” and the state’s “newly introduced regulation” as the reasons for its decision to leave. 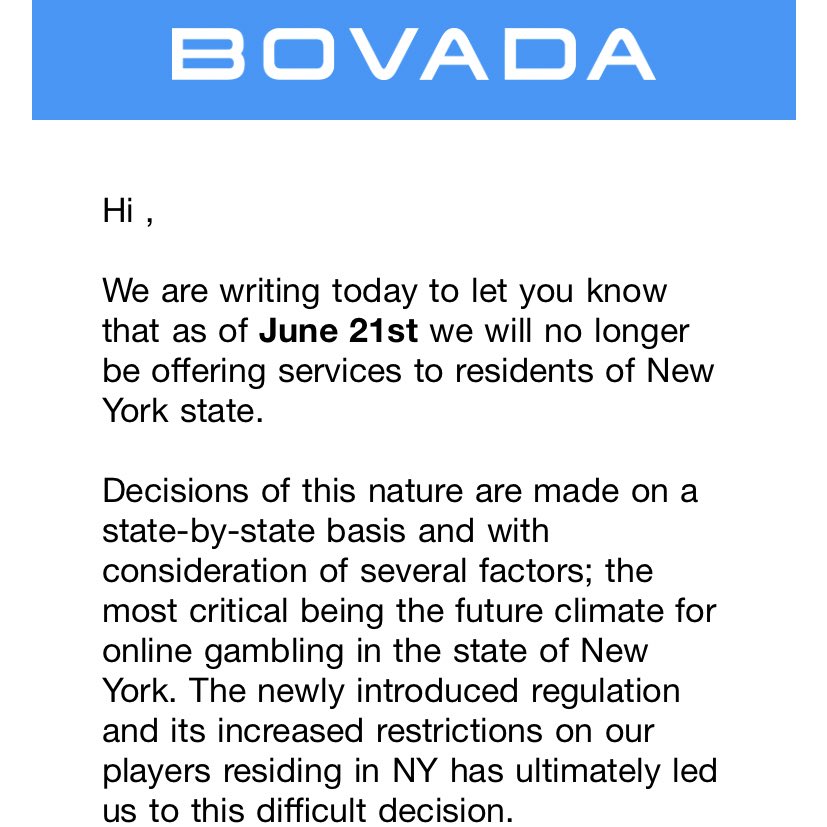 The text (on right) is a reference to the state budget signed by NY Governor Andrew Cuomo on April 19, which authorizes two online sports betting providers to service the state’s bettors. An ongoing bidding process to determine the providers has begun and, once the state selects the winners, several more months of testing are expected.

Despite Bovada’s upcoming departure, Empire State online poker players aren’t necessarily locked out of Bodog-family games. Bovada, in terms of its online poker services, is only one of several skins on the PaiWangLuo Network, which itself was a 2017 rebranding of the original Bodog Poker Network.

Bovada Poker reopened to US players in August of 2017, though all of the players who were moved to Ignition Casino in 2016 remained with that skin. The sites have existed side-by-side ever since in terms of allowing play from the US. Which site is larger isn’t publicly known, though given Bodog’s and Bovada’s long history, it’s possible that Ignition remains the larger of the two sites in terms of poker-player volume.

Ignition Casino doesn’t offer online sports betting, except for fantasy sports-style contests, in addition to its online poker and online casino services. This makes a migration of all of Bovada’s current services and players to Ignition Casino unworkable. Bovada could issue a follow-up advisory urging its New York players to consider moving to Ignition, though the overall loss of traffic to the network should be minor.

The PaiWangLuo Network ranks about fifth in global online poker cash-game traffic, according to data-accumulator site PokerScout, putting it in a rough tie with PokerStars Europe.