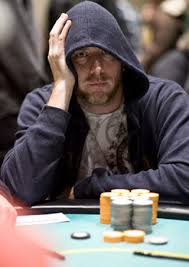 Christian Lusardi, the man caught trying to stuff counterfeit casino chips down the toilet at a New Jersey casino, will now be flushing commodes somewhere slightly less glamorous: Lusardi  has been sentenced to five years in prison for his crimes, and hit with a $1.1 million fine.

The 43-year-old, who came to the attention of the poker community in 2014 after he allegedly tried to smuggle bogus chips into the Borgata Winter Poker Open, was sentenced last week after having his initial hearing delayed.

Despite the sentence being unrelated to poker, it was the game that ultimately landed Lusardi in trouble after the police caught up with him for blocking up the toilet pipes in Atlantic City’s Harrah’s Casino.

During the opening event of last year’s Borgata Winter Poker Open, the organizers were forced to pause the tournament after more than two million extra chips were found to be in play.

Chips Leave a Trail to Lusardi

An investigation ensued and a short time later Lusardi reportedly poured hundreds of forged chips down a toilet inside Harrah’s. After the system became blocked and the problem traced back to his now-vacant room, he was eventually arrested. Following a preliminary hearing, the poker player entered a sealed plea and the charges connected to manufacturing counterfeit poker chips appeared to be dropped.

In fact, according to Maurice VerStandig, an East-Coast attorney contacted by Pokernews, there could have been a deal between state and federal prosecutors with regards to Lusardi’s case. 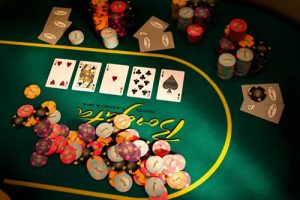 Hundreds of counterfeit chips allegedly were flushed down a Harrah’s Atlantic City casino toilet, creating a flush that was anything but royal for Lusardi.(Image: borgata.com blog)

“Could he have negotiated a dismissal of the state charges in exchange for his federal plea? Absolutely. Is it odd that he [pleaded] guilty to both counts with which he was charged in federal court? Somewhat. Does this suggest federal and state prosecutors cooperated? Maybe. But is any of this a certainty? Absolutely not,” VerStandig told Pokernews.

A History of Counterfeiting

Although the chip incident may not have landed Lusardi in jail, it was certainly the catalyst the authorities needed to crackdown on his DVD-making empire. According to reports, customs agents had been investigating Lusardi on suspicion of making counterfeit DVDs since 2012.

The agency was able to intercept shipments from China, and traced the main shipping address to Lusardi’s home in Fayetteville,  North Carolina. Once inside, agents found more than 35,000 pirated DVDs, as well as a slew of equipment used for creating bootleg products and their accompanying labeling and packaging materials.

Overall, it’s believed Lusardi made close to $1.3 million selling bootleg DVDs online and at local flea markets. This information was then put under the spotlight after his counterfeit chip arrest. Lusardi subsequently stood trial for copyright infringement.

After admitting to the copyright violations, plus additional charges relation to trafficking, the poker player was sentenced to serve the five years in jail and ordered to pay $1.1 million in penalties.

There is also the possibility that he could still face charges relating to the Borgata chip incident. Although unlikely, his admission of guilt as part of a possible deal means he could still be charged at a later date.

disgrace. hopefully when he gets out, everyone knows whatsup

he’s an all around scum. just a cheater.