Bolt and Hart to Faceoff as Part of PokerStars Latest Promo

PokerStars is doubling down on its recent #RaiseIt social media campaign with a dual promotion featuring Usain Bolt and Kevin Hart. 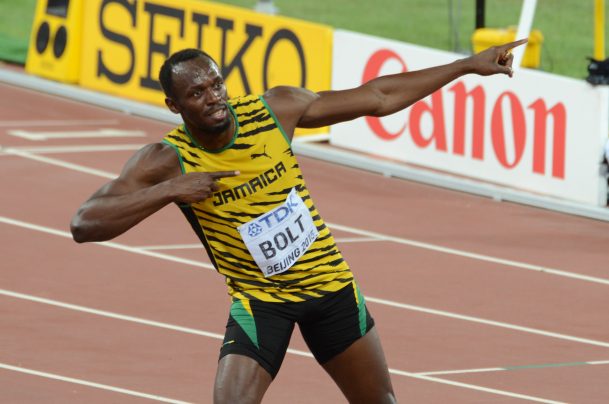 Usain Bolt and Kevin Hart will battle it out across social media before a final showdown at the 2018 PokerStars Championship Bahamas. (Image: usainbolt.com)

After signing sprinter Bolt and comedian Hart as brand ambassadors earlier in 2017, PokerStars has launched its first marketing push featuring the well-known pair.

According to a press release sent out on June 30, the two celebrities will compete against each other in a “social media battle” using the #GameOn hash tag.

The genesis of the campaign stretches back to 2013 before the pair became representatives for PokerStars. Despite a severe speed disadvantage, Hart challenged Bolt to a full court race at the 2013 NBA All-Star Celebrity Game (see video below).

Using what some would call a false start but others would call initiative, Hart won the race and that spawned a good natured rivalry that’s still alive today. Taking this, PokerStars has decided to rework the #RaiseIt campaign that featured Cristiano Ronaldo and Neymar Jr. challenging players to show off their best skills.

It’s up to Hart and Bolt to decide how they want to outwit their rival, but their social media followers will be the ones that decide the result.

While the campaign will harness the pair’s 90 million+ social media followers, the main event will be a live showdown at the 2018 PokerStars Championship Bahamas.

A Push to Bring Newbies to Poker

PokerStars has been trying to attract casual players for at least two years and during that time it’s courted a number of high profile figures to help. In line with recruiting the likes of Neymar Jr., Ronaldo, Dwayne Wade and others, PokerStars has continued to offer “recreational” style poker options.

As well as Spin & Go tournaments, Beat the Clock MTTs and The Deal Jackpot (where you’re dealt a random hand to win prizes) have given inexperienced players more chances to win.

Some longstanding PokerStars customers have rallied against such games, but celebrity endorsements have ensured there’s been a steady stream of players keeping the action alive.

#GameOn will be the latest innovation to push this influx of new players and, moreover, bolster PokerStars’ position atop of PokerScout’s online rankings.

While some will disagree with this push to make poker more “casual player friendly,” Hart has already vowed to inject some fun back into poker and #GameOn will be the first move towards that goal.