The Main Event of the 2017 World Series of Poker is just over a week away, and Bodog has released their 2017 WSOP odds. Fans now have the opportunity to wager on who’ll win the Main Event, how old they’ll be, and can get in on a last-longer bet between Michal Phelps and Kevin Hart. 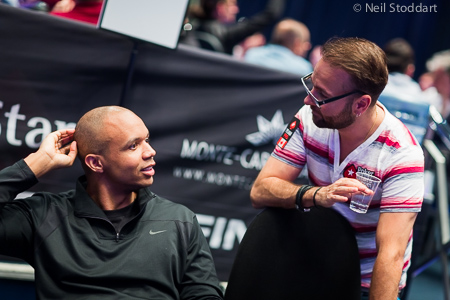 Phil Ivey has yet to show his face at the 2017 World Series, yet he and Daniel Negreanu are still favorites to win the Main Event. (Image: PokerStars)

As of June 28, Daniel Negreanu and Phil Ivey are the favorites to win the Main Event at 66/1, meaning if you bet $5 and they actually come through, you’d win yourself $330. Meanwhile, Bertrand “ElkY” Grospellier and Fedor Holz are listed at 100/1, while a plethora of players come in at 125/1, including Erik Seidel, Jason Mercier, and former champs Joe McKeehen and Johnny Chan.

A little further down the list with WSOP odds of 150/1 are Antonio Esfandiari, Ben Lamb, and Patrik Antonius, while players like Phil Hellmuth, Martin Jacobson, and 2017 WSOP Player of the Year contender Chris Ferguson, all of whom have won the “Big One” in the past, come in at 200/1.

In addition to who’ll win, Bodog has put odds on a variety of other Main Event possibilities. For example, players can bet on the age of the winner (27 years or older or 26 of younger both at 20/23), the final hand (5/7 that it’ll be two pair or better, 11/10 it’ll be one pair or worse), and how many Americans will be at the final table (over/under 5.5).

You can even bet on the color breakdown of the final flop:

And where the eventual champ hails from:

There are also numerous WSOP odds listed for celebrities Kevin Hart and Michael Phelps. You can bet on whether or not they’ll finish in the money, what their final hands will be, and who’ll last longer between the two. If you think Phelps will go deeper, you can bet him at 6/5, while Hart, who has vowed to make poker fun again, is listed at 2/3.

All bets are contingent upon the listed player actually playing in the Main Event.