Bobby Baldwin Injured in Two-Staircase Tumble at Aria, But No One’s Saying What Happened

Former WSOP Main Event champion and City Center executive Bobby Baldwin took a tumble down two flights of stairs at Aria in Las Vegas last Saturday, and was severely injured. According to his son B.J., the 67-year-old is going to be fine, but a lot of bones were broken and it sounds like a long recovery period lies ahead. 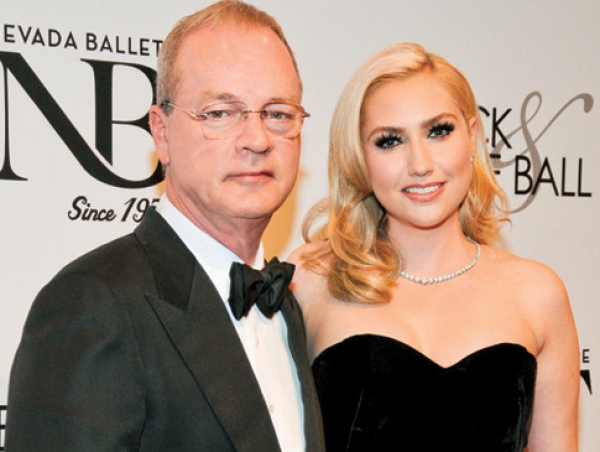 Legendary poker player and industry executive Bobby Baldwin (seen here with his wife Audra in 2014) will have a long road to recovery ahead after taking a devastating fall at the Aria. (Image: vegasmagazine.com)

Perhaps the oddest thing is what’s not being said anywhere: where within the Aria, and under what circumstances, the fall took place. A week after the accident, there’s been no information released to fill in the blanks.

B.J. Baldwin posted a video on social media on his way to the hospital to visit his father. He referred to the injuries as “serious,” and explained what happened.

“… He was in an accident and fell down two flights of stairs,” B.J. said in the video. “He fractured his pelvis in three places, shattered his elbow, fractured five of his ribs. He’s got a massive impact on his forehead and has 40 stitches in it. So, he’s really messed up. But he’s going to make a full recovery. He’s surrounded by people that love him and we’re going to take really good care of him.”

The younger Baldwin, after word spread about his father’s injuries, attempted to make a video showing everyone his dad was fine and in good spirits. He took that video down after some on social media found it offensive. He didn’t explain what was found to be offensive in it, though.

Bobby Baldwin has made many friends in the poker community over the years. One of those individuals is fellow high-stakes pro Jean-Robert Bellande. The two gamblers have competed against each other regularly in Ivey’s Room at Aria the past few years.

“Just spoke with Bobby Baldwin. Elbow surgery went well. No life-threatening injuries. He’s in good spirits. no golf for a while. #brokenchief,” Bellande posted on Twitter.

Doyle Brunson has also played poker with Baldwin many times. The old-school pros are good friends and have great respect for each other.

Baldwin was the 1978 WSOP Main Event champion. He has four career World Series of Poker bracelets and more than $2.3 million in live tournament winnings. He doesn’t play many tournaments these days, only competing in the occasional high-roller event. But he’s still a regular in high-stakes cash games in Las Vegas.

Baldwin has meant so much to the poker community that a high-stakes room at Bellagio, Bobby’s Room, was named after him. Players such as Doyle Brunson, Daniel Negreanu, and Jennifer Harman have been regulars in the room over the years.

In 2003, Baldwin was inducted into the Poker Hall of Fame.

The 67-year-old Oklahoma native is more than just a poker player. He’s been a casino executive since 1984, first working for the Golden Nugget in downtown Las Vegas. Baldwin now serves as an executive for MGM Resorts International.

I remember playing Bobby Baldwin online so many years ago. A true gentleman and a man I consider a friend even thou I have never met him in person, but we have talked online and had conversations while playing poker.

Get well soon Champ , hope to meet you in Vegas 2019 if I am so lucky to get the chance.

How much would you bet he didn’t have to take a drug and alcohol test at the hospital?