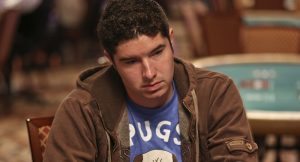 What are the odds? Blair Hinkle took down his third WSOPC Council Bluffs title (Image: cardplayer.com)

Variance is a very strange thing, and here’s a statistical weirdness for you: while it took ten years and over one hundred tournaments for someone to win an EPT main event twice, Blair Hinkle has just won the World Series of Poker Circuit Horseshoe Council Bluffs main event for the third time in four years! Don’t ask to calculate the odds – we can’t, but they must be stratospheric!

Of course, it helps that Hinkle has awesome skills – he has a World Series of Poker bracelet, for winning the $2k NLH event of 2008, and just last year he won the Championship Event at the Seminole Hard Rock Poker Open, for $1.7 million. His live tournament cashes exceed $3.5 million.

Heck, he even has a brother, Grant, who has a WSOP bracelet. But when you consider that his victories at the WSOP Council Bluff events represent 50 percent of all his tournament victories, according to Hendon Mob, you can see just how much this tournament loves him.

In 2010 Hinkle – of Kansas City, Missouri – took home $88,566 for winning the tournament, while last year netted him $121,177 in prize money. Returning to the Horseshoe in Iowa to defend his crown in 2014, he outlasted a field of 247 players to take home first-place prize money of $90,770. Only this is the first time a player has won a WSOP Circuit event three times; it’s also the first time anyone has successfully defended a title.

During a war of attrition, Hinkle worked his way into the lead before being beaten back down again by his opponent, and then doubling twice at Level 29 to reach an advantage from which he would win the tournament. On the final hand, Bond limped on the button with A-8 while Hinkle raised his opponent all-in with 7-7. Bond called off his last 1.4 million, only to see the board run out K-3-3-4-5, giving the title to Hinkle. Bond picked up $56,086 for his endeavors.

Hinkle’s triple victory here is an extraordinary achievement that may never be beaten. Along with his prize money, he also wins a seat at the WSOP Circuit’s National Championship, which hits Atlantic City from 22nd to 24th May. Before that, the WSOP Circuit will take in three more stops: Philadelphia this week; Colorado, from 2-5 May; and New Orleans, 16-19 May.