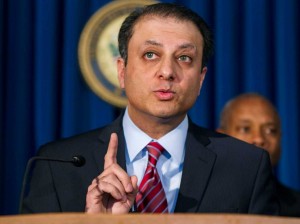 Preet Bharara, the man who brought online poker to its knees in the US, could be the country’s next AG. (Image: businessinsider.com)

Will Preet Bharara join the race for US Attorney General following Eric Holder’s recently announced resignation? Bharara, the current US Attorney for the Southern District of New York, was the infamous mastermind behind poker’s Black Friday and the decision to aggressively prosecute the online poker industry in America in 2011.

It was Bharara who said that Full Tilt was not a legitimate poker business, but a “global Ponzi scheme.”

With the current Attorney General, Eric Holder, announcing this week that he would be stepping down from the post due to “personal issues,” many see Bharara as a potential successor, which could spell bad news for online poker in the US.

While Holder said he deemed the Black Friday indictments “appropriate,” his view of online poker seemed to be far more vague than that of Bharara, who made chasing PokerStars, Full Tilt and Absolute Poker out of America a top priority.

“We have to enforce the law as it exists and there are laws on the books with regard to Internet gambling that we have to enforce,” said Holder of the events surrounding Black Friday at a House Judiciary Committee hearing back in 2011. “The case that we brought for instance in the Southern District of New York involved pretty substantial amounts of money and big financial institutions and I think those cases are appropriate.”

However, when pressed, Holder said that it was up to Congress to clarify the laws on poker and that it was “beyond his capabilities to determine whether poker was a game of skill or luck.” When asked whether he thought Phil Ivey was the world’s greatest poker player or simply very lucky, the baffled AG replied:

“I am not sure I know who Phil Ivey is, but I am sure there is some degree of skill that is involved, some degree, I am not a poker player myself.”

While Holder, the first black American AG, has been praised for his dedication to civil rights issues, his tenure has been unpopular with many Americans and will be remembered for the role he played in Operation Fast and Furious, the sting attempt to track firearms to Mexican cartel leaders that went very awry, and for a refusal to prosecute financial institutions that may have been guilty of corporate crime.

Bharara, by contrast, is a dynamic individual and a committed enemy of corporate crime, who managed to secure 85 straight convictions for insider trading cases, and has been praised for his determination to make Wall Street accountable for its actions. It’s these dogged, crusading qualities and sharp legal mind that, many feel, make Bharara top AG material, and the reason why he’s appeared in TIME Magazine’s list of the world’s 100 most powerful people.

There are three other names in the running, however: Massachusetts Governor Deval Patrick, Solicitor General Donald Verrilli, and the only woman on the list, California AG Kamala Harris. Of course, online poker players will be hoping that Harris is the successful candidate; she recently refused to sign a letter supporting a federal ban on Internet gambling.

This is all you need to know about preet http://www.bankruptcymisconduct.com/new/people/preet-bharara.html