Bitcoins and Hackers and Ransoms, Oh My! Dark Forces That Afflicted Poker in 2017

Poker’s issues this year have mirrored those of the world at large. While society felt the impact of digital hacking, the threat of ransomware, and couldn’t help but notice the surging prices of something called Bitcoin, these same unexpected forces reached into an internet poker community waking up to the new threats it faced. 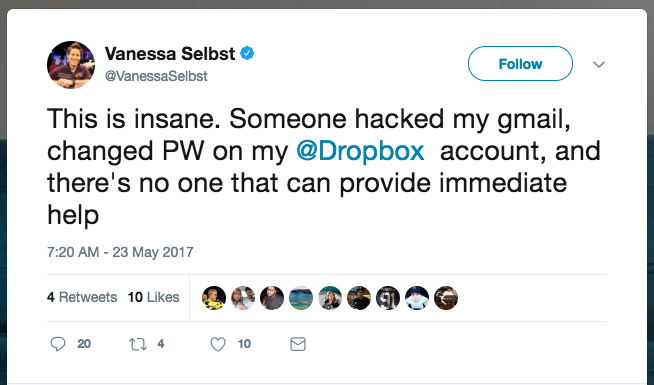 Vanessa Selbst was one of several poker players who had their personal information hacked in 2017. (Image: Twitter)

High-limit poker pros were defenseless when hackers seized control of their phones, Twitter, and Facebook accounts in May. Vanessa Selbst, Dan Smith, Cate Hall, and Vanessa Rousso all came forward to acknowledge their personal information had been stolen. And they turned out to be not the only victims in the high-stakes community, according poker pro Doug Polk, who covered the crime on his popular YouTube channel:

In another case affecting not just individual players but a whole site, a hacker demanding ransom forced America’s Cardroom to cancel ongoing tournaments and refund player buy-ins for three days in early September. But Winning Poker Network CEO Phil Nagy refused to pay, and told viewers on his Twitch channel why:

“We had the attacker get on chat and say I am gonna attack you in one minute and he does the attack, but I will never pay an attacker I won’t pay a ransom, I won’t do it because once you let the bully get your lunch money, he’s taking your money all the time. Once they make you a bit*h, you are a bit*h, and I don’t like the idea of being a bit*h.”

Can Cryptocurrency Save Us?

Another type of account that has grown in popularity among poker players has been digital currencies. Such “crypto” cash as Bitcoin, litecoin, and ethereum have proven that they can quickly turn an average poker bankroll into a massive pile of real money.Some online poker sites have started accepting different variations, and cashing out is typically quick and easy.

“Not sure about anyone else but I am loving these bitcoin payouts – Last month I withdrew $1400 from BOL in bitcoin, took out $400 in cash and left the rest in my bitcoin wallet … Since then I have been making a killing with Ethereum and have purchased some litecoin (although not as aggressive it’s still climbing).”

And while bitcoin and the blockchain technology its built on are considered exceptionally secure, anytime the currency is hosted on a centralized network such as a poker site, it’s in danger of being hacked, according to 888poker’s security team.

That’s how a hacker used a security breach at Mt. Gox Bitcoin exchange in June 2011 to illegally transfer many the coins to himself after fraudulently dropping the price of a single bitcoin to one cent, which he later sold at a massive profit.

The hackers are working hard to get into these places where the host is centralized like 888poker’s security team says, cause that is when they are going to be paid as well, by demanding ransom, or to blackmail some others to not reveal personal information like pic, videos and so on.
It has been a tough year more for some players than others, but things like this lets you grow and be no paranoid but being cautious in everything you get into.

Hope everything will be fine, stupid hacker.. I wonder why such kind of people even exist 🙁