Bill That Would Shut Down Oregon Poker Clubs Moves Forward

Currently in Oregon you can play poker at one of several small pubs or dedicated card rooms. Most have 10 tables or fewer. By law, the house doesn’t take a rake, but they can charge a membership fee, which could be $10 a day in some places, or maybe $60 a month in others. 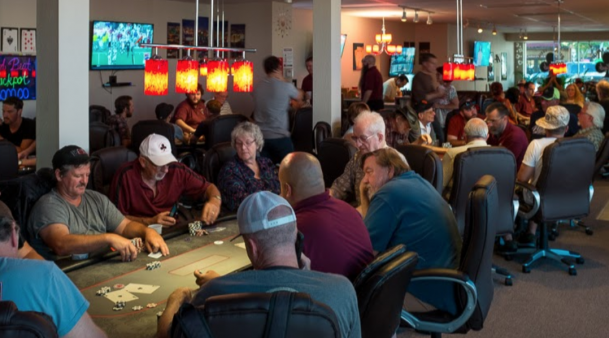 A bill moving through the Oregon legislature threatens “social” poker clubs that have become a mainstay of the state’s poker scene. (Image: Medford Poker Club)

The formula has worked for players and operators for many years. But now a bill moving through the Oregon legislature threatens that business model, and thus the 20 poker rooms in the state.

Last week, House Bill 2190 passed on a 41-14 vote, with both yeas and nays split across parties. The measure seeks to redefine “social game” as it pertains to gambling regulation in Oregon, effectively clearcutting the state’s poker landscape, opponents say.

The Beaver State’s card rooms operate differently than in most jurisdictions. Instead of charging a rake per hand or tournament, poker players pay a cover charge sort of like going out to a nightclub. Dealers don’t earn an hourly salary. They are paid only in tips. The card rooms also make money selling food and drinks.

HB 2190 would modify the definition of “social game” for the purposes of gambling regulation, in ways the current operators fear would put an end to their business of providing poker in safe and friendly confines.

“Social game” under the proposed bill, HB 2190, is defined as follows:

A game, other than a lottery, between players in a private home where no house player, house bank or house odds exist and there is no house income from the operation of the social game unless controlled by a charitable, fraternal, or religious organization.

Oregon’s social gaming exemption was written in the 1980s, but it wasn’t until the poker boom of the early 2000s that poker rooms began using this exemption to proliferate across the state, rankling various lawmakers.

At issue, primarily, is the role of the dealer. Legal interpretations are unclear about whether “professional” dealers can volunteer and work just for tips in social gaming contexts.

Last summer, the city of Portland sent a letter to its 15 local card rooms, advising owners that paid dealers were not allowed under state law. Instead, the request was to have players take turns dealing. But poker room operators balked, saying this would lead to possible cheating and inevitable player frustrations with inconsistent shuffling and dealing. Collusion would also become a more likely threat without a trained dealer to monitor each table.

Some Oregon card rooms attempt to circumvent dealer restrictions by using the button to signify to players it is their turn to deal, at which point they have an option of deferring to a designated player assistant to deal.

An attempt to ban Oregon poker rooms was introduced in the 2013 legislative session, but that bill ultimately fizzled in committee hearings. With last week’s vote, HB 2190 has moved further along in the legislative process than previous efforts that would’ve shut down poker in the state.

If the bill does become law, poker would still be legal in Oregon. But the newly defined view of what makes a game social would make it impossible for current card club operators to continue offering games.

So lame! They had a good thing going in Oregon. Juicy games. I will say some of the “professional” dealers were not very professional though.

Just like any other law, offer legal businesses state protection by either giving a business license or refusing the application.
It’s either a legally operated business or just take the business license away.