Bill Perkins will return for Day Two of the historic Triton Million on Friday at 1 pm local time in London with a chip lead. The hedge fund manager has his eyes set on securing tournament poker’s biggest prize ever – £19 million. 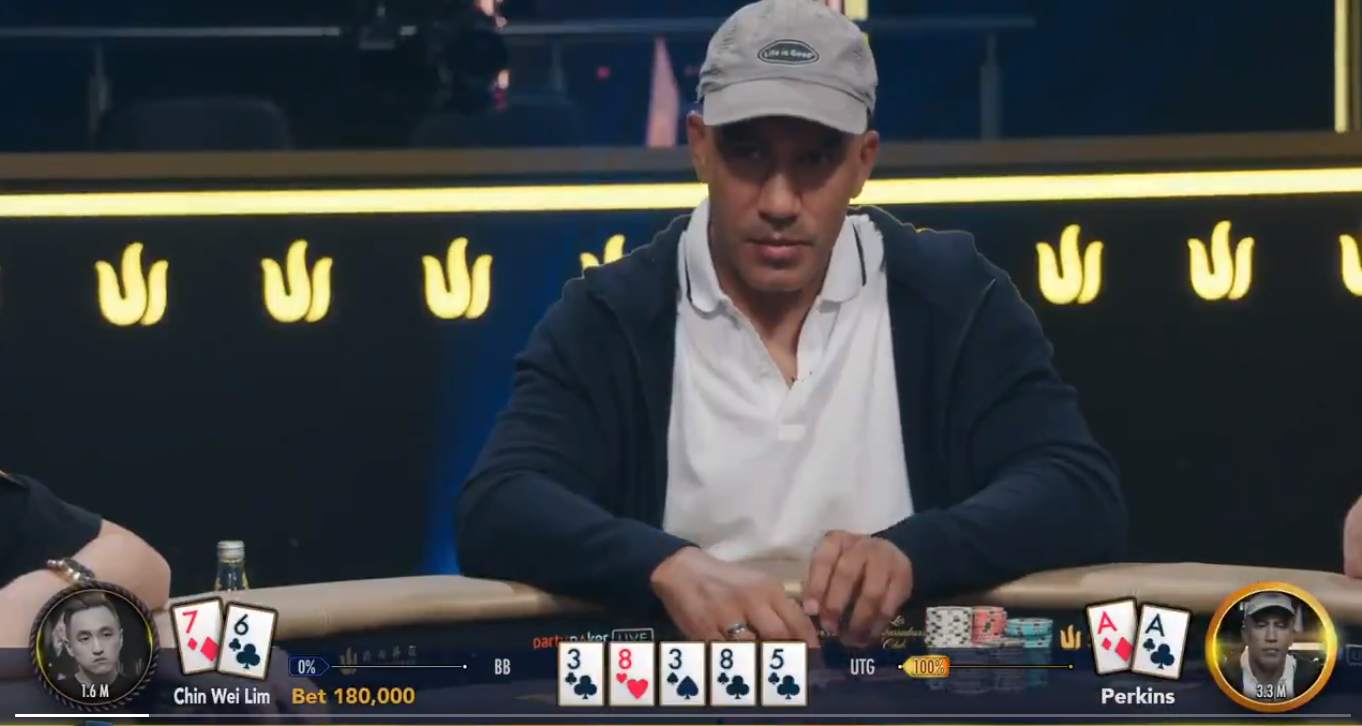 Bill Perkins is your surprise chip leader after Day One at Triton Million. (Image: triton-series.com)

Tom Dwan and Rick Salomon were among the 18 players who busted from this £1.05 million charity poker tournament. Perkins and 35 other recreational players and pros will come back for a second of three sessions on Friday. You can catch all the action live on stream at Triton-Series.com. CardsChat’s Jeff Gross is among those who will be providing the commentary.

Throughout much of Day One, Bill Perkins was, as he claims, “card dead.” The University of Iowa graduate grumbled on Twitter about his mediocre hands. But that frustration changed to relief by the end of the grueling session.

Phew! What a day! I was so card dead, I needed a Twitter debate about HC to stay patient and it worked. Hopefully patience pays off tomorrow as well! Goodnight

Patience certainly paid off for the businessman handsomely. He finished the day atop the leaderboard with 3,560,000. Timothy Adams is the only other player above 3 million chips (3,095,000).

Perkins, who is no slouch on the felt despite his recreational-player status, will have a difficult task holding that chip lead. There are some heavy hitters such as Nick Petrangelo and Justin Bonomo are creeping around, waiting for an opportunity to pounce.

Playing for Unthinkable Sums of Cash

Imagine being so wealthy that you can afford to play loose and relaxed in a seven-figure buy-in poker tournament. Heck, imagine even having that much money to enter a poker tournament. The 54 players who bought in either had enough money in the bank or a generous backer. And despite the ridiculously large admission fee, most players seemed relaxed and calm at the table on Day One.

But the pressure will begin to mount on Friday as the money bubble will fast approach midway through the session. Only 11 of the remaining 36 players will be paid. Once the bubble bursts, everyone left is guaranteed at least £1,100,000. But the winner will take home £19,000,000 (approximately $23 million United States dollars), the biggest payday in poker history.

Antonio Esfandiari, the 2012 WSOP $1 million buy-in Big One for One drop champion, currently holds the all-time record for largest tournament cash at $18.34 million. That record will no longer stand come Saturday.

This contest is really a great event for poker. Probably the players who left the tournament on the bubble experienced hard emotions. It is hard to imagine how difficult it is to leave this table.