Bill Perkins brought his A-game on Day 2 of a high-stakes, heads-up poker match against young poker pro Landon Tice. The hedge fund manager is off to a stronger start than most anticipated after booking a two buy-in win on Thursday evening. 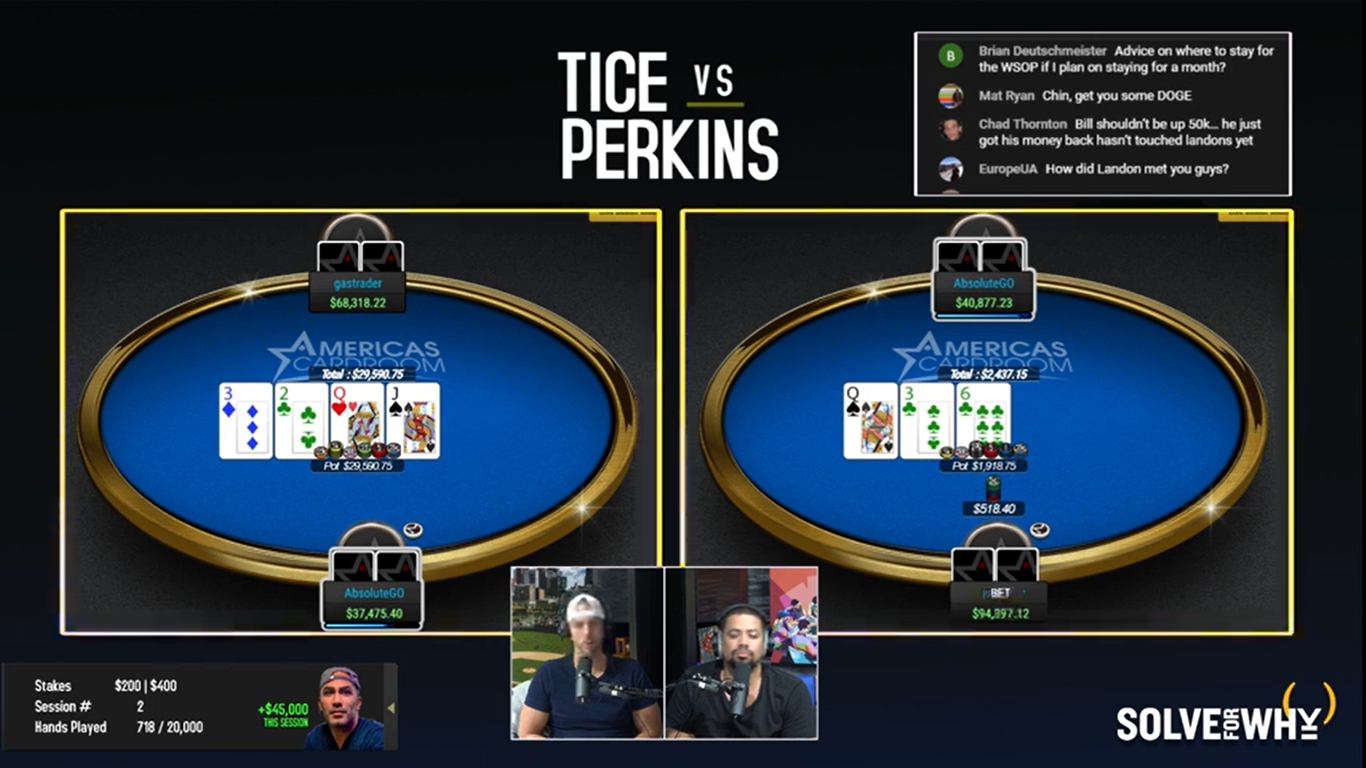 Bill Perkins and Landon Tice are both performing at a high level thus far. (Image: YouTube)

Tice booked a small win — $18,000 — on Day 1 (Wednesday) after having trailed by more than $130,000 early in the match. But Perkins showed during the session he just might be a bit better than some anticipated. Even his coach, MJ Gonzales, has been critical of the wealthy amateur poker player’s game, and said as much in an interview on the No Gamble, No Future podcast.

Two sessions into a heads-up match against a player considered by many, including Matt Berkey, to be one of the best up-and-coming poker pros in the game, Perkins has exceeded expectations. And while it’s far too early for Tice and his backers to panic — this match is scheduled for 20,000 hands — things could get dicey if he has another rough session or two.

Off to a fast start

In most heads-up matches, there’s no reason to be concerned by early struggles. You can often chalk up a slow start to variance. Daniel Negreanu led Doug Polk by more than $170,000 early on in their 25,000-hand match, but eventually lost by $1.2 million. Polk and Negreanu played at the same stakes — $200/$400 — as Tice and Perkins.

But, an early deficit by Tice in this match could be a recipe for disaster. That’s because he’s spotting Perkins nine big blinds per 100 hands. Assuming the match goes the full 20,000 hands, Perkins will be owed $720,000 as a rebate, or an additional payout beyond his winnings during the cash game sessions.

Thus, the reason why it’s important for Tice to avoid digging himself a deep hole, even early in the match. On Day 2, Tice jumped out to a quick lead of about one buy-in — $40,000. After that, Perkins mostly dominated the remainder of the two-hour session.

At the end of the day on the Americas Cardroom poker site, Perkins posted a $79,791 win over approximately 300 hands. The high-stakes competitors have now played just over 900 hands, with Perkins leading by around $61,000.

For Tice to win the match, with the handicap factored in, he’ll need to turn a profit of approximately $781,000 over the final 19,050-ish hands, or about 19.5 buy-ins. If the pre-match projections from Berkey and other pros are accurate — and Tice has a huge edge over a recreational player such as Perkins — that deficit certainly is far from insurmountable.

But if he falls further behind over the next few matches, the 21-year-old poker pro and his backers might have cause for concern.