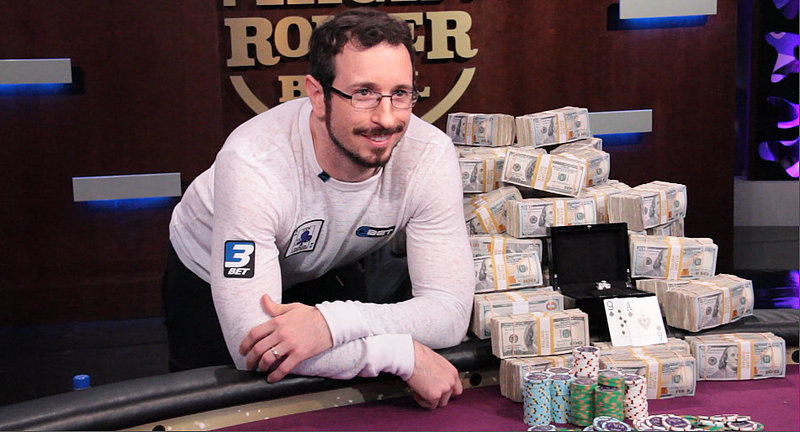 Who’s the winningest of them all? Brian Rast poses with his newfound lucre after this summer’s Super High Roller Bowl in Las Vegas. (Image: cardplayer.com)

Our biggest poker winners round-up for 2014 was an easy one last year, because that was the year that Daniel Colman went on the most mind-bending run in tournament poker history, without apparently breaking into a sweat. Or a smile.

The $22,389,481 he earned in 2014 has only been surpassed by three players in the game’s entire history: Daniel Negreanu, Antonio Esfandiari, and Erik Seidel, and it’s taken them their entire careers, to date, to amass those wins.

This year, it’s not quite so cut and dried, and the figures at the top are a lot closer together. However, according to the Hendon Mob website, we can reveal that the biggest tournament gross winner of 2015 was Brian Rast, who earned a very pleasant $ 8.58 million. This was largely by virtue of his $ 7,525,000 performance at the $500,000 Super High Roller Bowl at the Aria in Las Vegas in July.

Such was the effect this one tournament had on the year’s money standings that its second place finisher, Scott Seiver, was also catapulted into second place on the 2015 money list. Siever had an amazing year beyond that impressive finish as well, though.

In fact, having stabbed our fat sausage fingers repeatedly into our calculators, we can see that, with his overall gross earnings of $7,897,036 for the year, he picked well over $2 million outside of the High Roller Bowl, having cashed 15 times across 2015.

Shining at the WSOP

World Series of Poker Main Event winner Joe McKeehen was the third-highest earner, with the vast majority of his winnings, obviously, coming from taking down poker’s biggest event of the year, at least cosmically speaking.

The WSOP Player of the Year accolade, meanwhile, went to Mike Gorodinsky. As well as cashing seven times throughout the Series, the 29-year-old Russian-American won the illustrious $50,000 Players Championship for the second bracelet of his career.

With its 10-game mix of disciplines, the event is considered the truest test of all-round poker ability, and many pros consider it to be the “real” poker world championship.

At the time of this writing, Byron Kaverman is going strong into the GPI Player of the Year race, but Anthony Zinno and Nicholas Petrangelo are breathing down his neck and will no doubt be playing every tournament they can find throughout December to try and overtake him at the finish line.

Unless they don’t really care about annual player rankings, then maybe they won’t, who knows?

For online tournaments, and again, unless a major swing occurs in the lead time between the writing and publication of this piece, Sweden’s eisenhower1 (Christian Jeppsson) leads the field in the PocketFives Player of the Year race, thanks to a huge volume of cashes in online tournaments throughout the year.

Lastly, a word on cash games, which are a much trickier beast to quantify, since the live ones usually occur behind closed doors, and when it comes to online games, players are able to opt out of tracking. While Ben “Sauce123” Sulsky, Daniel “Jugleman_12” Cates, and Phil “Mr Sweets” Galfond all had huge years, each winning seven-figure sums, online poker may go down as the year that Viktor “Isildur1” Blom regained his online poker crown, with winnings, at the time of writing, of well over $4 million.

Phil Ivey, not so much, but we suspect he’ll win it all back next year.