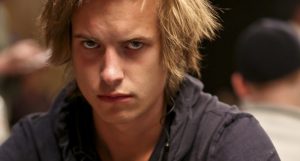 Pot Monster: Isildur1 features in three of the five online biggest pots of the year and all five of the biggest online pots of all time. (Image: CardPlayer.com)

The top five biggest online poker pots of 2015 (so far) were revealed this week by the High Stakes DB website, and predictably Viktor “Isildur1” Blom stars in four of them.


We say predictably, of course, because big pots are very Isidlur1’s cup of tea. In fact, if you were to look at the five biggest online pots of all time, you might be struck by the fact that the 25-year-old features in every single one of them.

The five biggest all-time pots all occurred during the glory days of high stakes of online poker at the nosebleed tables of the old Full Tilt, when, for just three insane months towards the end of 2009, pots in the biggest PLO games were regularly reaching the $300k mark.

Biggest Pot of All Time

The biggest pot of all time occurred on November 21st 2009 when Isidlur1 lost $1,356,947 in a single hand of poker to Patrik Antonius and you can view it here.

Incidentally, on the very same day, Isildur1 was also involved in fourth and fifth biggest online pots of all time, winning one and losing one against Phil Ivey.

Of course, the largest pots these days are not quite on the same scale: these were very much a product of their time, when the stakes were higher and Isildur1 was perhaps a little crazier and less adept at PLO.

The fireworks went off, as they generally do, when both players flopped sets. Isildur1, however, had WithColor crushed, holding top set of eights against the American’s set of sevens, as well as a redraw to the flush.

The fact that WithColor also held an eight in his hand would have helped him discount the proposition that he was facing top set, and all the money went in on the flop.

All five top hands of the year occurred at PokerStars, of course, and four of them in PLO.

The biggest no limit hold’em pot of the year, however, which ranks number four on the list, occurred when Phil “RaiseOnce” Ivey turned an unlikely straight against the flopped set of queens of OtB_RedBarron, identity unknown. Ivey shoved the river for value and picking up $296,092 in the process.

I dont know how Viktor does it ~ man cant sleep at night, can he? I know I suffer from the same thing when I play ~ winning and losing pots of upto a £10.00