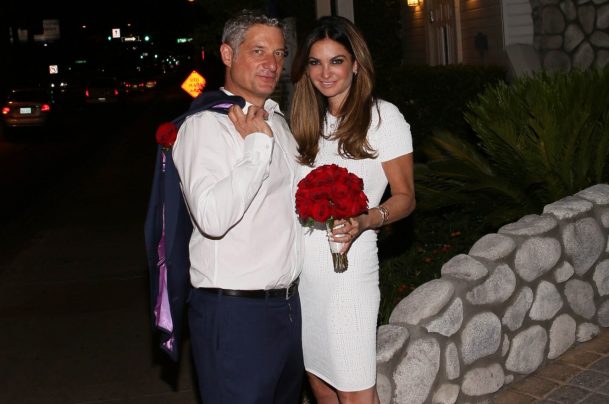 Shoe in: Rick Leventhal apparently impressed his new wife Beth Shak so much at a celebrity poker bash in February that she has now married him, just four months later. (Image: Page Six/NYPost)

Despite having met only four months ago (or maybe because of it, as love is still blind at this stage in any relationship), Shak and Leventhal decided to elope last week and completed their marriage vows in the Graceland Wedding Chapel downtown with a midnight ceremony.

Serving as a witness, appropriately enough, was former Lifestyles of the Rich and Famous host and Las Vegas local Robin Leach. Also in attendance were Versace, Yves Saint Laurent, and Cartier: well, at least via proxy. Shak wore their duds and shoes, and the couple exchanged rings from the tony jewelry purveyor.

For those who said it would never last, it’s already been a week (the wedding date was June 9, selected, according to the new missus, because it’s a “date that Rick won’t forget,” according to The New York Post’s Page Six gossip column). That’s the kind of comment that seems so adorable when uttered, and is so utterly cringe-worthy in the retelling. But we digress.

Whether they were selected new, or from her extensive $1 million existing collection of footwear, the new Mrs. Leventhal reportedly wore a pair of YSL six-inch heels to the matrimonial festivities.

According to Page Six, Shak and Leventhal (who is based in Fox’s New York studios) first met at a charity poker event for the Jed Foundation, an organization that promotes suicide prevention among college students, back in February. The event, held on Wall Street and hosted by Beth and former Main Event champ Jamie Gold, was a $500 ticket and the invite lists Leventhal as a “celebrity attending guest” at the affair.

Apparently poker wasn’t the only game going on that night for these two lovebirds.

Shak Attack at the WSOP

For fans of the World Series of Poker, Shak will be familiar for her memorable performance in 2007. Playing against Phil Hellmuth and Brett Richey the final table of a $3,000 No Limit Hold’em event, Shak moved all-in with pocket aces and found a caller in both Hellmuth and Richey.

Hellmuth also held pocket rockets, while the hapless Richey turned up pocket kings. While the hand itself was certainly one for the record books, it was the unsporting behavior from both Shak and Hellmuth that stunned poker fans.

As it transpired, Richey was eliminated while Shak and Hellmuth chopped the pot, but not before they’d finished their over-the-top celebrations.

Shak eventually went on to finish second in the tournament behind Shankar Pillai, but the $328,829 cash still stands as her largest poker win to date.

Woman of Many Talents

In addition to her own poker exploits, Shak was often at the side of her former husband Dan. A trader and high stakes poker player, Mr. Shak would often have Beth watching from the rail during TV tournaments and World Series events.

While Dan and Beth Shak are no longer together, it hasn’t dented her love for poker. According to Page Six’s report, Shak will be hosting another charity poker tournament at her Hamptons’ residence on August 27.

Back in January, Shak touted her own $1,000-an-hour dating skills service, which promised to help women find their perfect man, using techniques from the poker world. Apparently, it works.