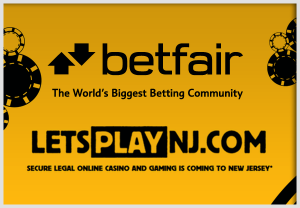 Betfair has seen modest success with casino games in New Jersey, but had no luck building a player base for its online poker room. (Image: Betfair.com)

Betfair has shut down its New Jersey online poker site, ending an unimpressive run for a site that simply never caught on in the Garden State. The close of the poker room won’t affect Betfair’s more successful online casino business, which continues to operate in conjunction with the Golden Nugget in Atlantic City.

No Poker Revenue in October

The Betfair online poker site, which was originally partnered with the Trump Plaza and then had a short-term agreement with Caesars Entertainment, was never a major player in the New Jersey market.

In fact, it wasn’t much of a minor player either: after collecting $90 in rake in a little over a month at the end of 2013, the site would go on to collect just another $50 through October of 2014. The numbers looked even more comical in the last two months of reporting: September brought in $1 in revenue, while the poker room’s take was actually $0 for October.

It had been hoped that Betfair’s site, which was branded as Ongame New Jersey, would be joined by a Golden Nugget-branded poker room in January 2014. But while that might have helped draw more traffic and made an Ongame network in the state more successful, that launch never came, which may have ultimately doomed Betfair’s poker aspirations in the state.

The end of Betfair’s poker room marks the second time in the last three months that a poker site has left the New Jersey market.

In September, Ultimate Gaming left the New Jersey market entirely, closing both their casino and poker sites after what they said were “multiple breaches” by its partner, the Trump Taj Mahal. Like Betfair, Ultimate Gaming was never successful on the poker side of things; the site did bring in some minimal traffic and revenue, but lagged far behind those operated by Caesars Entertainment and the Borgata.

Unlike Ultimate, however, Betfair won’t be closing down its casino offerings in the state. The Betfair New Jersey casino site generated more than $855,000 in revenue in October, and has brought in nearly $6.7 million over the first 10 months of the year, more than enough to make it viable.

The exit of Betfair leaves only two competitors in the New Jersey Internet poker market. First, there’s the Borgata/partypoker entry, which has the most traffic in the state. The site boasts as many as 400 cash game players during peak hours, with PokerScout putting the room’s average traffic over the last week at about 160 players.

The other competitor in the state is Caesars, which is working with 888 to offer online poker. Under the World Series of Poker (WSOP) brand, Caesars operates the second-largest site in New Jersey, with WSOP.com averaging about 120 cash game players and peaking at more than 300 players. There’s also a separate 888-operated poker site, the All American Poker Network, which boasts an average of 70 players itself.

Overall, the New Jersey online poker market has been somewhat disappointing when compared to initial projections, and the numbers have been getting worse in recent months. In October, total revenues for online poker in the state dropped below $2 million, the first time the total win had dropped below that level.