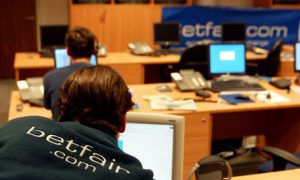 Betfair will be able to continue its New Jersey online casino operations, with servers hosted at Caesars. (Image: gioconews.it)

Betfair will be staying in New Jersey after all, thanks to a new deal with Caesars Entertainment. The UK-based betting exchange firm found itself in trouble when its land-based partner, Trump Plaza, shuttered its doors on for good on September 15.

Under New Jersey state gaming regulations, a company must team with an existing land-based licensee in order to offer online gaming, and the fate of the ailing Plaza, which became the fourth Atlantic City casino to close in 2014, initially threw Betfair’s US ambitions into doubt.

However, within a week, it emerged that the company would continue in partnership with the Taj Mahal, the Plaza’s sister casino. The New Jersey Division of Gaming Enforcement (NJDGE) was consulted and satisfied that Betfair’s agreement was with Trump Entertainment, rather than the Plaza itself, and that its online gambling interests could continue uninterrupted.

Furthermore, it was reported that Betfair already housed its technical platform at the Taj and so the transition would be seamless. That was, of course, before Trump Entertainment announced it was filing for Chapter 11 bankruptcy, stating that the Taj would close in mid-November unless it received concessions from its unions and creditors.

Once again, Betfair found itself all dressed up with nowhere to go. Ultimate Gaming, which had also partnered with the Taj, decided to cut and run, concentrating instead on its Internet business in Nevada. But Ultimate’s foray into the Garden State was largely unsuccessful; Betfair, on the other hand, had fared better. While its poker operations had completely failed to gain traction, with figures in September suggesting that it had taken a pitiful $48 in gross gaming revenue in 2014, its casino operations were robust, reporting $3.7 million in gross gaming revenue so far this year.

However, this week it emerged that the DGE has approved the agreement between Caesars and the London-listed company, granting it a “transactional waiver,” which is valid for six months. Under the deal, Betfair will be permitted to host its servers from Caesars under a Data Center Sublicense.

Meanwhile, as Trump Entertainment squabbles with the unions and its unsecured creditors in the bankruptcy court, the Trump name was spotted being removed from the front of the Taj this week. Donald Trump is incensed at what he sees as a misuse of his brand by a company that he says has failed to live up to the name. Trump ordered his lawyers to sue Trump Entertainment last month for breach of the licensing deal they agreed in 2009. His daughter, Ivanka, confirmed in an interview with The Wall Street Journal that the name was indeed coming off the property, because “they have failed to retain the standard.”

At the same time, Bob McDevitt, President of the Unite Here local casino workers union, warned that an “act of civil disobedience” was planned for this week over attempts by Trump Entertainment to sever contracts with its workers, an act that would bring to an end pension funding and medical benefits.

all financial success in New Jersey for his pioneering action in seeking to regulate online poker in their territory making profits …. I always think I’m vegas when I think I play poker in the United States well this article woke me up for one thing …. New jersey may be an option and very near New York …. it would be a dream achievement 2 in 1