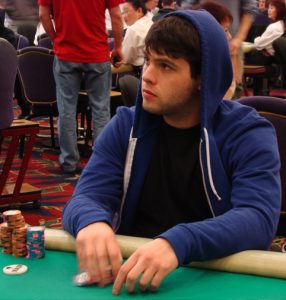 Ben Sulsky continues to be mired in a downswing, losing well over a half-million dollars in just six days to start off June, 2014. (Image: bankrollmob.com)

If there is one thing fans of both online and live professional poker have learned, it’s that money is a relative object depending on who you are. To some, losing a hundred dollars in a single poker tournament is absurd and not worth the risk. To others, tipping the valet a cool fifty dollar bill is standard fare. However, there are some sums of money that even have high-stakes poker pros batting an eye.

Unfortunately for online poker pro Ben Sulsky, June 2014 will be a month that might live in infamy, as he has lost a little over $582,000 in just six days of play.

Up on Stars, Down on Full Tilt

According to various online tracking sites, Sulsky has lost about $834,000 on Full Tilt Poker. The silver lining is that he’s up about $353,000 on PokerStars, meaning that he’s down well over a half-million dollars, all over the course of just six days of play.

Known as “Sauce123” (PokerStars) and “Sauce1234” (Full Tilt Poker), his records go back as far as March 2011, and he has consistently ranked as one of the best online heads-up players in the world. Overall, in 2014, the well-known online pro has had his struggles and is coming off a year in 2013 where he lost an estimated $1.8 million. That is a stark contrast to his 2012, where he ranked as online poker’s biggest winner, amassing $4 million.

A Downswing Since February 2013

According to online databases, Sulsky’s downswing on Full Tilt Poker started on February 2013 and hasn’t let up. At one point in February, he was up to about a million dollar profit, then swung sharply to a $1.86 million loss. Since then, it’s been up and down, with his total net loss on the site currently ranking at $1.24 million.

His latest opponents include Viktor “isildur1” Blom, whom he has dropped approximately $2.8 million to, as well as a player known as “punting-peddler,” who has taken Sulsky for over $1.2 million. It’s clear that Sulsky is beating some opponents for profits considering the heavy losses against those two players, but overall, it seems the poker pro has seen better days.

Many have railed Sulsky’s matches at heads-up tables against Blom, who is widely considered to be one of the most dangerous players in the world. Much of the action has come at $300-$600 Pot-Limit Omaha tables. The biggest hand the two have played to date was won by Blom for $222,000, when the popular Swede hit a Queen-high flush.

Sulsky is an American player that originally hails from New Hampshire. His specialty is heads-up high stakes No Limit Hold’em and Pot-Limit Omaha games. While he dominated the tables in 2012, he has struggled to get action there since, and when he has, it has not been profitable.

In August 2013, he began to make strategy training videos for RunItOnce.com, which is a site owned and operated by Phil “OMGClayAiken” Galfond. Commonly referred to by his friends as “sauce,” he got his start in the world of online poker by winning $3,000 in a freeroll tournament. He’s known as a player that sticks to rigid bankroll requirements and is extremely strong in both logic and mathematical skills. Sulsky’s biggest tournament cash came in May 2012, when he won the PokerStars SCOOP #37 event for $258,300.

It Happens to the Best

Don’t be too quick to judge Sulsky with his recent run of bad fortune at the virtual felt. Readers should recall that back in 2012, it was Blom who went through a rough patch and posted a few weeks with six-figure losses. When playing heads-up Pot-Limit Omaha, the amount of variance experienced is typically higher than No Limit Hold’em games. Despite that, it stands to reason that an eighteen-month downswing would weigh heavily on even the most steady poker pro.

Are most of these hot players self taught or have they learned from somebody that knows how to really play good? Curious. I am a self taught up and comer and hope to start winning some some good money soon. I do study video of top players though and read books on the subject. I’ll now be following this Ben Sulsky character….

So he is considered a Poker Pro why???Because he plays for millions of dollars? If you ask me he sucks at the game and it’s very obvious since he’s down 834k on stars and only up about 200k on another site. If you ask me this guys nothing more then a kid with a lot of money to blow. The term poker pro is used so loosely.