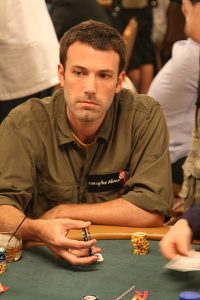 Hollywood megastar Ben Affleck has been barred from the blackjack tables of the Hard Rock Casino in Las Vegas for card-counting, it emerged last week. And it seems the Oscar winner and poker enthusiast is more convincing an actor than a card cheat, as casino surveillance officers reported that his play was “way too obvious.”

A warning was flagged up last week on Surveillance Information Network (SIN), a database which allows the Vegas casinos to share information on known “suspicious characters,” stating that Affleck was suspected of “advantage play,” and that he had been spotted around town betting sometimes up to $20,000 on a single hand of blackjack.

“While playing at a table, Ben was asked repeatedly to stop card counting,” a source told Star Magazine. “However, he would not stop. The casino staff told Ben that he was being too obvious.”

“You’re too good at the game,” security managers apparently told Affleck as they escorted him and his wife, actress Jennifer Garner, to a waiting taxi.

It’s understood that Affleck was using the “perfect basic” method of card-counting, in which the player will assign point values to each card that allow him to mathematically determine when the deck is “hot” – namely, likely to favor the player as opposed to the house. When the statistical advantage is in his favor, as determined by knowing which cards have been eliminated from the deck and which haven’t, the player will increase the betting amount accordingly.

While card-counting is not against the laws of the land, because it’s not strictly cheating, it’s a no-no in the casinos, which tend to prefer things when the odds are in their favor. Thus, the skill of the counter is as much in disguising that he is using a system at all, as it is in effectively employing the system, and it seems it’s the former which Affleck needs to work on.

He seemed to fair a little better in a session around three years ago, however, when it was reported that he won $800,000 in a night playing blackjack at the Hard Rock. That night he handed out tips amounting to $150,000 to dealers and waitresses.

It’s just the latest episode in a long line of Affleck’s gambling adventures. An avid poker player from the early noughties onwards, he was once upon a time receiving expert poker tuition from Annie Duke, which set tongues wagging about a rumored fling. It was Duke’s tutelage that helped him become Californian State Poker Champion in 2004.

Then, in 2011, Affleck, who played an online gambling tycoon in the recent movie Runner Runner, was named as one member of a high-stakes Hollywood poker game, along with Matt Damon, Leonardo Di Caprio, Tobey Maguire and a hedge fund manager named Brad Ruderman. Ruderman had lost hundreds of thousands of his clients’ money at the game, and several clients attempted to sue the members of the game to get their money back. Affleck was not mentioned in the lawsuit; however, Tobey Maguire was, and eventually settled with the plaintiffs.

Affleck was on a short break in Vegas before starting work on his next project, Man of Steel, in which he plays Batman to Henry Cavill’s Superman.

Read P. Conneller art. on Ben Affleck and if i was Ben i would be takeing conneller to court for calling him a card cheat.

Beautiful story. How many times do the dealers out-do the house in profits off of one guy? Sad news if this is really today’s Las Vegas.