Actors Ben Affleck and Adam Sandler will join NFL superstar Tom Brady and other A-list celebrities on Americas Cardroom Saturday for a charity poker tournament. All proceeds will go toward helping raise money in the fight against hunger. 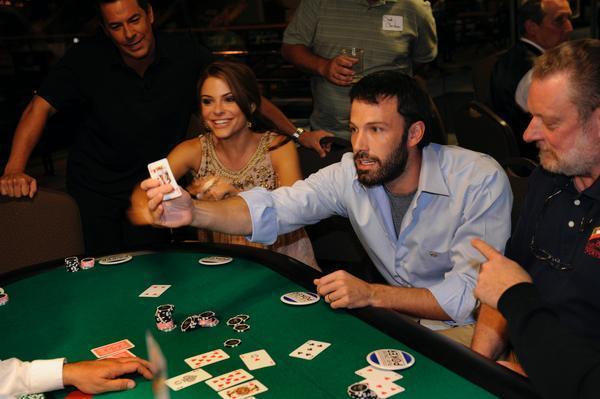 Don’t be fooled by his acting talent, Ben Affleck can play poker too. (Image: Denver Post)

Only 75 players will be allowed to enter the No-Limit Hold’em poker tournament, many of whom will be celebs. But everyone can watch the action live on Twitch beginning at 11 am PT tomorrow. Where else can you watch your favorite celebs compete on the felt, or at least the virtual felt?

Proceeds raised during the event will go to the Feeding America charity. Affleck and his celebrity friends have already raised more than $1 million to help fight hunger. Due to the coronavirus pandemic, millions more people than normal around the US are struggling to pay for food.

“Excited to announce that I have joined forces with @FeedingAmerica, the nation’s largest domestic hunger-relief organization, to raise money for folks who need it most,” Affleck wrote on Instagram.

Affleck is more than just an Academy Award-winning actor. The Massachusetts native is also a poker enthusiast who won the 2004 California State Poker Championship for $356,400. That’s a drop in the bucket compared to his estimated $130 million net worth.

On Saturday, he’ll log onto ACR and try to prove his poker skills once again. But he’ll be playing for a good cause instead of trying to pad his bankroll.

Affleck, who previously played Batman, will be joined by numerous A-list celebrity friends including Adam Sandler, Tobey Maguire,  Sarah Silverman, Jon Hamm, Adam Levins, and the new member of the Tampa Bay Buccaneers, Tom Brady. And, of course, you can’t have Affleck compete in a poker tournament without his sidekick, Matt Damon.

Poker pros Justin Kelly and Michel Loncar will call the action on Twitch.

Due to the coronavirus scare that has forced people to stay home, online poker has been booming again. That’s certainly a positive for the poker community, but Poker Central’s Remko Rinkema wonders if a charity tournament such as this could ruin the fun for everyone. And he makes a valid point.

No gamble no future

Americas Cardroom is an off-shore poker site that accepts deposits and withdrawals via Bitcoin. Phil Nagy, the company’s CEO, has avoided legal issues in the US despite operating an unlicensed poker site in the country.

Rinkema questions if an event like this will bring too much attention to the poker site. He worries the attention could bring ACR down, leaving thousands of players in jeopardy of never seeing their account money again. He could be on to something.

At some point this will be a big problem:
” Americas Cardroom is an off-shore poker site that accepts deposits and withdrawals via Bitcoin. Phil Nagy, the company’s CEO, has avoided legal issues in the US despite operating an unlicensed poker site in the country”.
Just sayin ……..

All this publicity with big names that will attract a new wave of recreational players to an unregulated site, is sickening. Everyone should be ashamed. I will not watch and I hope more people do not. To all the poker pros, celebs and athletes that endorsed this, shame on you too! The intentions are good, but clearly everyone didn’t do their homework. Just give the million dollars to Feed America. Why the publicity stunt? I had a lot more faith in the poker community to do the right things during these times but once again I am wrong! The NBA HORSE challenge on ESPN Sunday @ 7pm will be better!