Bellagio Poker Room Armed Robber Gets Away with Cash, Still at Large

An armed man robbed the Bellagio poker room cashier cage at gunpoint Tuesday afternoon and received an undetermined amount of money when the cashier complied with his demands but, fortunately, no one was physically harmed. The suspect got away, but police have publicly released surveillance photos and details of the getaway car. 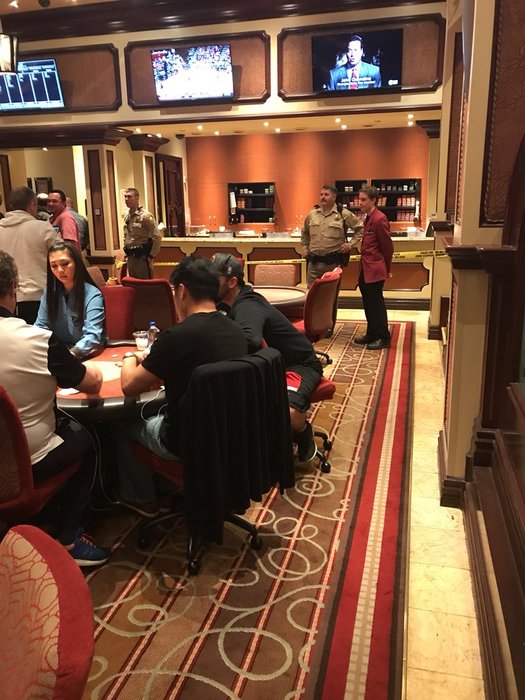 Police presence was notable in the Bellagio poker room after an armed robber walked into the room demanding cash and got away on Tuesday afternoon. The suspect remains at large, for now. (Image: Twitter user @RandyOhel)

The Las Vegas Strip casino, an MGM Resorts property, is a popular place for high-stakes poker games. The room often has more than 30 games running at any given time. During the robbery, a mix of celebrities and pros were in the house, including actor James Woods and grinder Randy Ohel.

“So we are playing poker at the @BellagioPoker and a guy walks up with a gun and robs the cage thirty feet from us ten minutes ago,” Woods, who is known as a conservative pundit, posted on Twitter.

Woods praised the casino staff for its handling of the situation, and said, “they surrendered the money quietly, so no customers would get hurt. Nobody even realized it was happening. Excellent staff, cool under pressure.”

Ohel, a Las Vegas local with over $1.6 million lifetime in live tournament winnings, also announced the incident on Twitter. He said the robbery lasted less than 30 seconds and the suspect exited out the north valet area, which is a relatively short walk from the poker room, and directly outside of tony high-end stores.

Police were unable to apprehend the suspect before he exited the premises. But they got clear surveillance video of the culprit and the vehicle he escaped in.

“BE ON THE LOOKOUT: Silver Chevrolet Cruze with NV license plate 37D147. A white male adult, armed, robbed a Bellagio Hotel/Casino cash cage around 3:45 today and fled in vehicle. Call 9-1-1 if vehicle is spotted,” the Las Vegas Metro Police Department posted on Twitter.

The suspect entered the casino wearing what appeared to be a wig, beanie cap, glasses, and a bandage on his face, possibly to cover up a tattoo.

A Metro officer told Las Vegas NBC affiliate KSNV that “there was potentially somebody” in the car with the suspect. But he said, “that person potentially came here against his own will.” Police don’t consider this individual an additional suspect after interviewing him.

Bellagio has been a target for criminals in the past. Robberies occurred at the famous Las Vegas resort twice in the past seven years, but weren’t quite on the Ocean’s Eleven level.

In 2010, an armed motorcycle bandit walked up to the craps table, pulled out a gun, and stole $1.5 million worth of casino chips in less than three minutes. The suspect, Anthony Carleo, was later apprehended and sentenced to at least nine years in prison in 2011.

Carleo, according to his profile on PrisonInmates.com, claims to have been addicted to oxycontin at that time. He describes himself as an “easy-going dude,” and “easy to talk to,” in case you’re looking for a new pen pal. He’s certainly got lots of time on his hands to write letters.

Earlier this year, masked robbers broke into a high-end jewelry store inside the casino, using a sledgehammer to bust open jewelry cases.

Three suspects were arrested soon after the incident, including a man who had been wearing a pig mask.

What a horrible story.
I feel more safe playing online poker from my home.
At least nobody was hurted.
We live in a cold world 🙁

There was a lot of discussion about this after the robbery occurred whether or not armed guards at the cash cage could have prevented this or not.

Having worked at a bank in a cash cage, and noting that at my local casino the poker cage is literally 30 feet from the tables, the last thing you’d want is the possibility of a shootout inside the casino. If someone is that hard up for money that it’s worth it to them to go into one of the most videotaped establishments you can find in a city, armed, and demand money isn’t going to be deterred by armed guards.

The best way to deter this type of crime is to make it so inaccessible for the robbers. Cages shouldn’t have much money at their fingertips (banks do this) and to have the cage as far away from exterior doors as possible to make the robbers go to.

Because if I was in a casino and it got held up, I don’t want to be privy to a gun fight.