Los Angeles Dodgers outfielder Yasiel Puig will host a charity poker tournament on May 22 at Dodger Stadium. The event will help raise money for the Cuban defector’s Wild Horse Foundation, a nonprofit organization that benefits  economically challenged kids and their families by donating food, toys, athletic equipment, and school supplies. 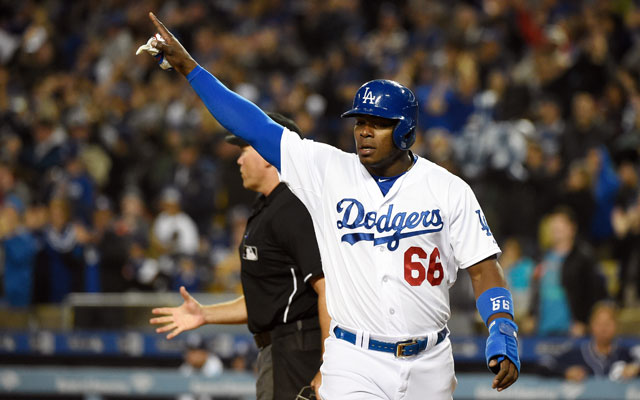 Outfielder Yasiel Puig will host a charity poker tournament on May 22 at Dodger Stadium to benefit his own charitable foundation that supports kids. (Image: cbssports.com)

The evening will include a Texas hold’em tournament with prizes awarded to the top 10 finishers, hors d’oeuvres, dinner, drinks, and a silent auction.

Although anyone can attend the event itself for a $300 price tag, it will run you an additional $700 for a ticket into the poker tournament. Groups can purchase $5,000 to $20,000 sponsorships to secure more seats into the tournament, along with and other amenities.

A $20,000 sponsorship gives a sponsor and their guests 16 tournament entries, 16 autographed baseballs, a meet-and-greet with Puig, and 120 tickets to a Dodgers game to be donated to a charity of the sponsor’s choice. Several of Puig’s Dodgers teammates, comedian George Lopez, and other celebrities are also scheduled to attend.

Yasiel Puig is one of Major League Baseball’s most controversial ball players. The 26-year-old defected from Cuba to the United States in 2012 to get away from Fidel Castro’s regime and make a living playing baseball. He was making just $17 a month in his home country.

In 2013, Puig made an instant splash with the Dodgers. He batted .319 in 104 games and likely would have won Rookie of the Year had he played in the big leagues the entire season. “Puig Mania” was the talk of Los Angeles that year.

Thousands of Southern Californians left their sunny beaches on summer evenings to head over to Dodger Stadium to catch a glimpse of Puig’s talents. But the party didn’t last long. His attitude became a problem.

Puig began to regress in his second season. The Cuban outfielder and then-Manager Don Mattingly clashed at times. Dodgers fans started questioning his effort on defense and his lack of hustle on the base paths.

Then last year, Puig was benched for refusing to run out a flyball. In 2015, he suffered from injuries and only played half the season.

His batting average, on-base percentage, and OPS has been on the decline since his rookie campaign. When an athlete is putting up All-Star caliber numbers, fans will excuse occasional lazy play. But when a player like Puig simply isn’t producing, that athlete will take a verbal beating from hardcore fans.

Puig is off to a solid start in 2017, batting .273 with 4 homers in his first 16 games. But if he’s going to get back in the good graces of Dodgers fans, he’ll have to keep it up for the entire season.

The Wild Horse Foundation is near and dear to Puig’s heart, because he himself grew up poor.

Now that he makes millions, the outfielder is giving back to the community. Wild Horse helps kids in numerous ways. The organization distributes food to underprivileged youth during the holidays, donates supplies to community centers, and purchases toys for needy children.

this would be cool but to rich for my bloood