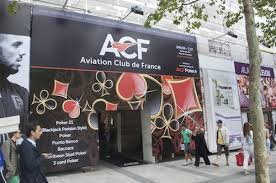 The iconic ACF will not reopen.(Image:Casinoeurope.com)

The Aviation Club de France (AFC), one of Europe’s most iconic poker venues, has dealt its last hand after the local authorities decided not to renew the 107 year old club’s gambling license.

Despite displaced workers holding out hope that the club would reopen following its closure in September 2014, the Grand Instance Court confirmed that the doors will not be opening and that ACF is now in judicial liquidation.

ACF Now and Then

During its heyday the Aviation Club was home to some of Europe’s richest games and often hosted the continents toughest grinders. In addition to cash games with limits reaching into the thousands, many of the top tournament operators found a home in the Parisian venue, including the World Poker Tour (WPT).

Each season the WPT’s annual Paris Grand Prix would attract the top players from both sides of the Atlantic who always put on some of the finest poker showdowns of the year.

However, in recent years the club has suffered at the hands of the ailing French poker economy and things came to a head in September last year when a police raid brought games to a standstill. After kicking down the doors in the early hours, 12 people were taken into custody following allegations of money laundering and irregular employment practices.

After the dust had settled and the community began to take stock of what happened, a collective of employees and poker pros called for the club to be reopened. Using the hash tag “#bringbackACF”, the likes of Liv Boeree, Fabrice Soulier and Antoine Saout, all pushed for the Aviation Club to reinstate poker games.

Unfortunately, this move was unsuccessful and the ACF will now stand empty while the auditors initiate the bankruptcy process.

The Death of French Poker

This latest incident, coupled with a continued downswing for country’s online poker community, has left many declaring the death of poker in France. At the close of 2014, the WPT announced it would no longer be hosting an event in Paris and the EPT followed this up with news that its annual event in Deauville will now no longer take place.

For French players, as well as the community at large, the news of the Aviation Club’s demise will serve as a stark reminder that the gaming industry is a tumultuous place. Although ACF had a number of legal issues, the culmination of its closure and the decline of poker in France prove that even well established venues can be dealt a bad hand.

It might not have been his finest moment at the felt, but Tony G’s performance in the WPT Paris finale was one of the most memorable in the festival’s history. In a now infamous showdown with Surinder Sunar, G not only demonstrated the heart and commitment required to become a WPT champion, but some slick poker skills. Vowing to “take everything” Sunar had and “destroy him“, G bulldozed the table; however, he ultimately failed to claim the title and the $828,956 top prize after losing heads-up to Mr. Sunar.

its always a shame when a great poker spot/ business runs its course , but it happens to restaurants , clubs and bars all the time . famed sports stadiums fade as well .

It is very sad such places are always trying to close, why?