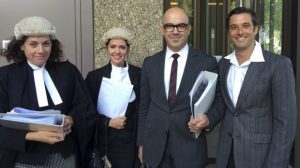 Nicholas Polias (right) and his legal team. “I hope this sets a precedent to those wishing to harm an individual’s reputation through the tool of social media,” said Polias. (Image: smh.com.au)

Australian poker player Nicholas Polias has been awarded AU$340,000 in damages after fellow players called him a “thief” on Facebook. The judge in the case ruled that plaintiff Polias’ reputation had suffered “significant damage” due to the defamatory accusations of four of his former friends on the social media site.

The court heard that the offending posts stemmed from an incident at World Series of Poker (WSOP) 2012, a “misunderstanding,” when $2,000, belonging to Polias’ roommate, Tobin Ryall, went missing from a dresser in a Las Vegas hotel.

The money was later found hidden inside a soft toy in the room. However, Ryall published a post on Facebook implying that Polias was a thief, manipulator, and a liar, while another in the same poker circle, Andy Hun Wei Lee, re-published the post and recounted an incident that occurred at the Star Casino in Sydney, when he claimed Polias attempted to short-change another player during a high-stakes game.

Polias responded to both posts, recounting the misunderstanding that had taken place in Las Vegas and explaining that the “short-change” incident was nothing more than an accident, which he had rectified the moment the mistake was noticed. However, despite Polias’ attempts to address both accusations, his ex-friends refused to take down their posts, prompting him to sue them for defamation.

Also charged with defamation were Sandy Jan and Rhys Gould, who were accused of spreading the malicious rumors around the Sydney poker community, despite, according to the judge, “knowing nothing” about the actual incident in Las Vegas. The court heard that the pair repeated the accusations to around 25 poker players at a Chinese restaurant at the Star Casino.

The judge ruled that the defendants were unable to prove that the accusations that they had made were true, and, this being their only defense, it was a clear case of defamation and aggravated damages were justified.

He also criticized the defendants for being unreliable witnesses, singling out Ryall who, he said, had been “deliberately prevaricating, dissembling and lying” during the case. Sandy Jan, meanwhile, continuously denied she had repeated the rumors, despite witness evidence to the contrary.

Andy Hun Wei Lee had been particularly “vicious and malicious,” the magistrate said. He also ordered that the offending posts, which remained on Facebook until recently, be removed.

“In some respects, the confined nature of the readership made the hurt and distress (and the need for vindication) even greater than would be case if it were a publication at large and not to persons who knew and dealt with (Mr Polias) on a regular basis,” said the judge. “I am satisfied that the plaintiff suffered significant damage to his reputation and felt significantly distressed.”

“I’m just elated that my reputation has been restored,” said Polias. “It’s never really been about the money; it’s just been about clearing my reputation. People should be very careful about what they write on social media because it spreads like wildfire and it can be really damaging to someone because it stays on Facebook for a long time.

“I would not wish what I have been through on my worst enemy,” he added. “I hope this sets a precedent to those wishing to harm an individual’s reputation through the tool of social media. Bullies should mind their words and be very careful who they pick to bully. In this case they surely picked the wrong person.”