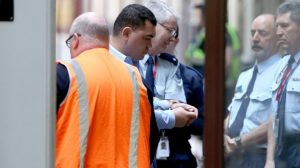 An Australian poker player by the name of Col Thomas was recently charged with murder after investigations revealed a complex love triangle turned deadly.

After being arrested and charged with the murder of George Anagnostellis, Thomas appeared in front of a Supreme Court judge on Friday where he was found guilty of murder and arson.

According to reports, Thomas became enraged when he discovered that fellow poker player, Billy Theoharis, had been intimate with his ex-girlfriend, Tina Thwaites.

Wanting to exact revenge on Theoharis, Thomas cornered Anagnostellis after a poker game.

Along with Anagnostellis, Andrew Heke and Scott Sullivan, Thomas took part in a poker session at the Sandown hotel, Melbourne, before the group went back to the home of Anagnostellis’ parents.

As the group continued drinking and playing poker until the early hours, Heke and Sullivan left the game after the latter became ill.

With no one else around, Thomas started to question Anagnostellis about Theoharis and his relationship with Thwaites.

As tensions escalated, Thomas demanded to know where Theoharis lived and, when Anagnostellis refused to tell him, the assault began.

Described in court as a succession of punches, kicks, elbows and headbutts, Thomas succeeded in beating Anagnostellis to the ground.

Left in a critical state, Anagnostellis struggled while Thomas set fire to the garage they were in.

Thomas quickly left the scene, but after a police investigation he claimed that it was actually Anagnostellis who set fire to the garage after shouting that he was going “blow everyone up.”

Later investigations revealed that Anagnostellis wasn’t in fact the man behind the arson and Thomas had concocted an elaborate story in an attempt to cover his tracks.

Unfortunately, his bluff wasn’t enough to convince Crown prosecutor Tom Gyorffy, QC, who stated that Anagnostellis had petrol in his throat and, therefore, couldn’t have been the perpetrator.

“The only way it could get there is if he was lying on the ground, his mouth open, and the petrol was poured over his body. There’s no other way. The fire logically has to have been after the assault occurred,” said Gyorffy.

With his story in tatters, the jury voted unanimously in favor of a guilty verdict and Thomas was remanded in custody until October 26.

A judge will now review the case and deliver a sentence in the coming weeks.

According to Australian law, the maximum penalty for murder is life imprisonment which, like the UK, equates to 25 years behind bars.