Aussie Millions 2018 Set to be One of the Biggest Ever

The 2018 Aussie Millions schedule has been set and hopes of a big turnout are high despite the pending online poker ban in Australia. 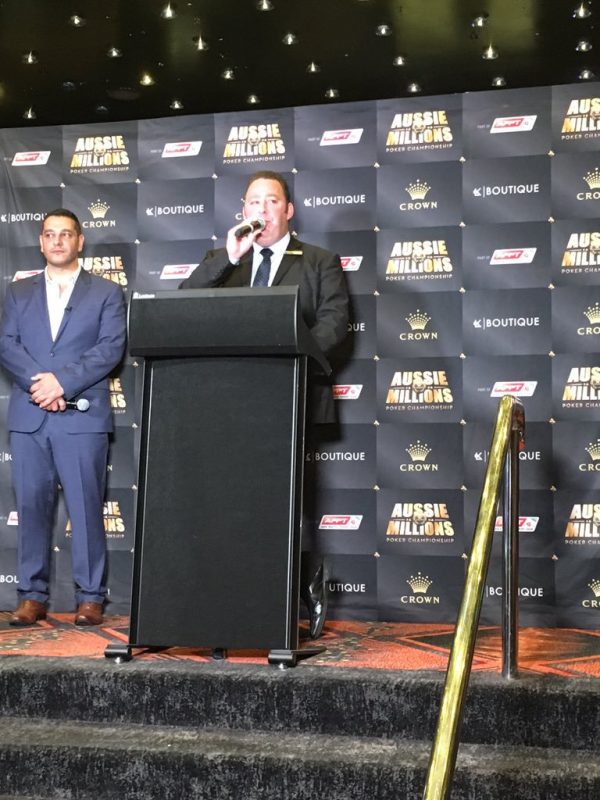 Crown Tournament Director Joel Williams releases the Aussie Millions 2018 schedule and believes it could be the biggest ever. (Image: @JoelGWilliams/@crownpoker)

With the World Series of Poker (WSOP) complete, the eyes of the poker world are one again looking ahead to the next round of major championships.

The Aussie Millions is traditionally one of the opening festivals of the year and it will retain that status in 2018 when the first of its 26 tournaments kicks off on January 17.

Set to take place in its longtime home at the Crown Casino, Melbourne, the 2018 Aussie Millions will feature its usual array of tournaments, except for the AUD$250,000 Challenge (USD$198,000). Despite being one of the more recent additions to the schedule, the organizers pulled the tournament from the roster in 2017 due to falling attendance figures.

Although super high rollers have become popular with seasoned players over the last decade, the USD$198,000 price tag didn’t prove popular enough and won’t be back this year. Although that particular “Challenge” won’t be making a return next January, the Aussie Millions will be offering three high stakes events.

On that occasion, Australia’s Shurane Vijayaram made his way through a tough final table that included the likes of Fedor Holz and Jeff Rossiter to take home the $1,208,368 top prize. In 2018 the organizers are expecting just as many players, if not more, to ante-up despite the Australian government’s push to outlaw online gaming.

Earlier in 2017, the Interactive Gambling Amendment Bill 2016 made its way through the Senate in 2017 and now sits in front of the House of Representatives. Although Senator David Leyonhjelm is working to fight back against the bill and carve out an exception for online poker, many believe it’s only a matter of time before it’s signed into law.

888poker exited the Aussie market in January 2017 and PokerStars has stated that it will follow suit once the bill becomes law.

The bill asserts that any company offering online betting in Australia will have to have an iGaming license. But without a licensing procedure in place, it’s essentially impossible for this to happen and, therefore, online poker sites would become illegal.

Despite the legal issues, the Crown’s Tournament Director Joel Williams told Pokernews early this year that he doesn’t believe this will impact the Aussie Millions. The 2017 festival attracted a record number of entrants (7,049) and Williams believes the ever-improving reputation of the Aussie Millions will attract a similar number of players in 2018.