Asia Championship of Poker 2016 Pays Out $12.3 Million in Prize Pools

Since late October, the 2016 Asia Championship of Poker (ACOP) has been playing out at PokerStars LIVE at the City of Dreams in Macau. The festival, which featured dozens of events over 17 days, concluded this past weekend with victories by Vladimir Geshkenbein in the Main Event and David Peters in the High Roller. 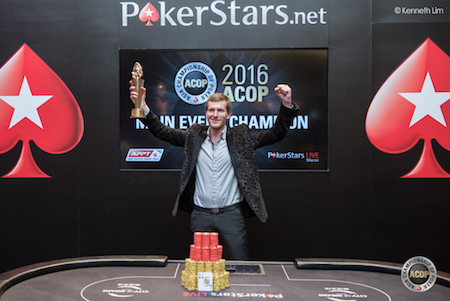 In addition, he made poker history by becoming the first player to win APPT and European Poker Tour (EPT) titles. Geshkenbein, now an economics student, previously won the 2011 EPT Snowfest.

Neel Murphy, who began the final table on the short stack, held strong and eliminated Kahle Burns in third place to take a 3-to-1 chip advantage into heads up play against Geshkenbein. However, with 57 big blinds, Geshkenbein had a lot to work with and eventually evened out the stacks before striking a deal.

With HK$600,000 and the title to play for, Geshkenbein took charge. On the final hand of the tournament, the two got it in on a T♣3♣7♦ flop with Geshkenbein holding the J♣6♣ flush drawn and Murphy the T♠4♣ for top pair. Geshkenbein missed his flush draw, but he made a bigger pair when a jack spiked on the river. 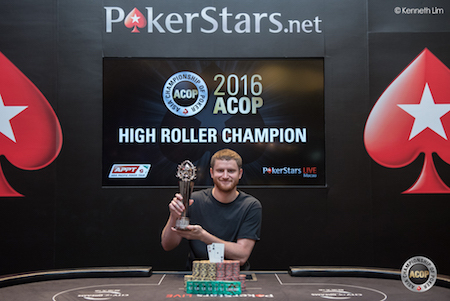 Paul Newey, who was making his second final table in a week after finish in third in the Super High Roller, ended up making it to heads-up play against Peters, albeit at a 7-to-1 chip disadvantage.

After an hour, Peters moved all in and received a quick call. Peters held A♣8♦ to Newey’s K♦6♠. Peters was ahead and held that spot after the board ran out 8♣J♦3♠7♠4♠.

“I feel amazing,” said Peters. “This was a very nice tournament to win and it went very smoothly. Usually it’s a little rougher but things went my way and I felt I played great the whole tournament. I felt like I was in the zone the whole time.”

Tan, Lin, and Danchev Among Side Event Winners

Finally, Celina Lin defeated Edison Nguyen in heads-up play to win the HK$11,000 Deepstack Championship. Not only did she win HK$475,350/$61,274 USD, but she also became the first player to win two ACOP Spadie trophies.