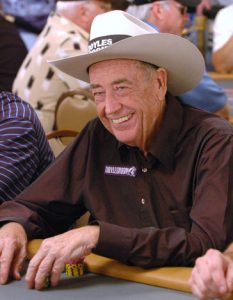 The old guard in poker, like Doyle Brunson, who is still revered to this day, are all but faded from the game. But will this mean that the game’s allure could also fade with that generation? (Image: wikipedia.org)

With another World Series of Poker Main Event put to bed, it would be hard to ignore the reality that poker’s old guard is slowly disappearing, and a new, brasher, possibly less legendary guard is coming to the forefront in their place.

But what’s that going to mean for the game and its status with players who have always looked towards these iconic players much as Americans look to cowboys as the essence of the Wild West? Let’s take a look; of course, we have to begin with the King of Poker himself: none other than Doyle Brunson.

Last year, legendary Hall of Fame poker player Doyle Brunson made a miraculous run in the 2013 World Series of Poker (WSOP) Main Event, finishing in 408th place, at the age of 79. Many speculated that it was to be Brunson’s last Main Event, due to the grueling hours required for each day of play, most of which require 12+ hours of play for a week straight.

And they were right: this year, Brunson broke the news via his Twitter feed stating, “… I’m not playing the Main Event. Hours are just too damn long.” With Brunson’s departure from the Main Event, presumably for good, many speculate that this is the signal that the old guard of poker is metaphorically dead, and with it, also might be going the diminishing aura that top poker pros once held as well.

Only after some time has passed with Brunson out of the game will we all truly begin to appreciate the man’s accomplishments over the last forty years. In his mid to late 70s, he’s tangled with the world’s best pros and made multiple final tables at both the WSOP and the World Poker Tour (WPT). For many in the pre-Moneymaker days of poker, Brunson was simply “the man,” and pointed to as the one who brought professional-level poker thinking to the everyday Joe. Not only did he dominate the tables winning tons of money and two Main Event bracelets, to many he literally wrote the book on poker.

Beyond those accomplishments, Brunson also came of age in an era when poker was still frowned upon by the population at large, perceived (not entirely without merit) as being full of seedy characters and basement games. Between him and his friends, such as fellow-star Amarillo Slim, stories that became the stuff of legend added to the aura and mystique that became “Texas Dolly” for fans of poker.

This is by no means an obituary, as Brunson is alive, doing well, and still playing great poker. But as his same Twitter post said, “#oldpokerplayersneverdietheyjustfadeaway,” we feel it’s reflective of a new point in his playing life.

The Diminishing Mystique of Top Pros

Most poker players and fans alike feel the same way about  Brunson the elder, in the sense that he’s a legendary player whose accomplishments will be appreciated for generations. When it comes to current top pros, such as Antonio Esfandiari, Phil Ivey, Phil Hellmuth, Daniel Negreanu, and other top household names, that mystique simply does not match what Doyle brought to the table. While each of the names just mentioned are all among the top tournament money winners of all time, they simply don’t bring the same rough-and-tumble backroom game aura with them that Doyle does.This then begs the question, is the era of the legendary poker pro dead, and with it the mystique of “major” poker professionals?

There are a few factors at play that could lead one to believe that yes, the era is dead, and yes, the mystique has actually been gone for some time. It’s not to say we all can’t behold a run that a top pro goes on and appreciate their thinking and consistently impressive decisions at the table. But the allure of a “bigger-than-life” personality who has won more money than most of us will ever see? Those days are probably over.

The first major factor coming into play is the ending of the old guard of poker that was presented to many of us as “current guard” some 10-15 years ago when we were first introduced to the game. Doyle Brunson, Dan Harrington, T.J. Cloutier, Amarillo Slim, and others were part of the old guard that were to be feared and appreciated at the tables. Phil Ivey, Daniel Negreanu, and Phil Hellmuth? Back then, just talented youngsters with bracelets. The mystique of “the old days” was simply something that the old guard will always have that the new guard cannot match in today’s 24/7 all-access culture. Just knowing that the old guard has seen and done it all already, and even competed in their golden years against the new young guns, is something nobody else can accomplish, and perhaps never will.

The second major factor is that many of us have been watching the current crop of top players on television for many years. They’ve talked to us about their game, informed us of what decisions they would make in certain situations and why, and given us access to their minds like never before. This level of access for players is great as it allows us to improve our game and appreciate poker at a whole new level. For pros, they get fame, endorsement deals, and exposure on ESPN, while also giving a little back for the game they love so much. The perks come at a price, though; since there’s no mystery behind their methods and over-exposure on television, it has made these pros familiar faces friendly, rather than formidable.

Are There Any Legends Left?

Sure, players mentioned in this article are all legends of the game, whether readers like their personalities or not. And there are others like Johnny Chan and Erik Seidel who continue to do well at the tables and win bracelets, and who still have the allure of “being a pro’s pro” in the game. But do we look to those players with the same iconic reverence we once held for players such as Doyle Brunson, Stu Unger, and Bobby Baldwin? Like Brunson tweeted himself, that aura has also #fadedaway.

The same holds true for today’s sports figures who also have media attention and big money but kind of lack the style,charisma and personality of past legends.Poker is changing with the times and new legends and media savvy players are replacing the old guard.There is a bit too much attention on the money and bracelets and not enough on the history and the hard grinding work required to really be a pro who lasts.