The Aria Super High Roller Bowl Day Two in Las Vegas concluded with some big names headed to the exits and a somewhat unknown topping the leaderboard. Daniel Negreanu began the day with a big stack, but couldn’t escape a bad run of cards on the tournament’s second day. 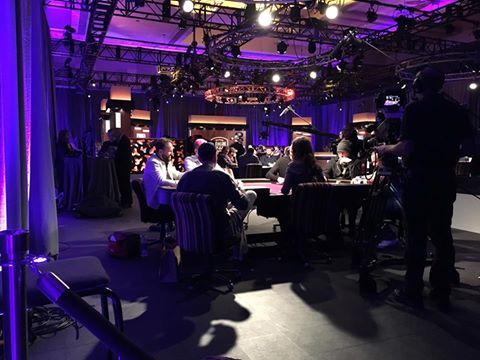 After losing an all-in pre-flop pot to Kathy Lehne, Negreanu found himself in a race the very next hand for all his chips against Erik Seidel. Kid Poker’s pocket deuces didn’t hold up, and his tournament run was over.

Seidel, on the other hand, had quite a day. He was up and down on Day One, mostly down, but picked up some steam on Day Two. He’s starts Day Three in second place, with 1,299,000 chips.

He’s posted a successful poker career, but is unknown to most casual poker fans. But if he keeps up this dominating performance, that will all change. Berkey’s rise to the top of the leaderboard was largely due to catching Tom Marchese bluffing in a massive pot.

The Big Cheese missed his draw on the river, but fired 384,000 into an already sizeable pot, and was called by Berkey’s top pair.

There are 16 players remaining headed into Day Three. Play will resume today on Poker Central’s Twitch page from 5 to 8 pm EST and then switches over to CBS Sports Network immediately after, at 8 pm. After Day Three, the tournament will be down to its final 7 players, with a $5 million champion crowned on Wednesday.

Old School Still Has It

A topic of debate on Twitter recently has been the old school versus the new school players. The younger generation may believe that older players lacks their game skills, but some old school pros are still dominating the game. 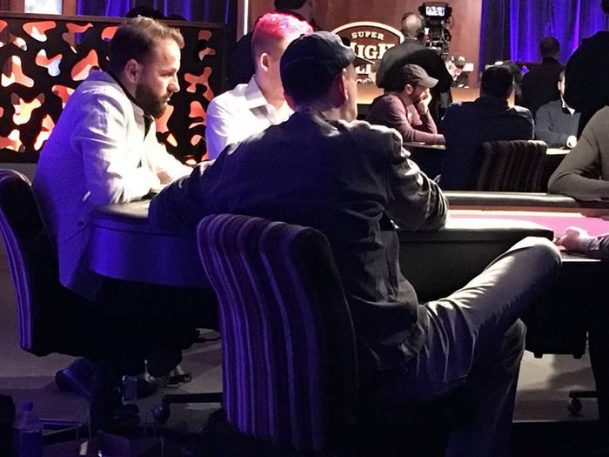 Star power: Daniel Negreanu (left) and Erik Seidel (back to camera) were seated at the same table on Day Two of the Aria Super High Roller Bowl 2016. (Image: CardsChat exclusive)

Although Daniel Negreanu was unable to make it to Day Three, but a few of his peers from the “poker boom” era did. Erik Seidel, winner of eight WSOP bracelets, is second in chips. He remains one of the most talented and consistent players in poker and clearly hasn’t been fazed by the young stars.

Phil Hellmuth is also still going strong as well. The Poker Brat has 936,000 chips and eclipsed the million-chip mark during Day Two.

Timofey Kuznetsov began Day Two with a big chip lead, but didn’t make it to Day Three. High-powered businessman and Dan Bilzerian cohort Bill Perkins went from chip leader early Monday to one of the smaller stacks by day’s end (367,000).

Other notable names still in the tournament as Day Three begins include Phil Galfond, Phil Laak, Jason Mercier, Andrew Robl, Ben Lamb, and Fedor Holz. Tom Marchese is in last place (321,000) now, thanks to his failed bluff against Berkey.

Getting Ready for WSOP

As almost everyone in poker should know by now, the 47th annual World Series of Poker at the Rio, about a mile from Aria, officially opens its doors today to the general public, with Colossus II mega satellites and some cash game action. It’s likely to be a quiet day at the Rio today, which is just fine for the WSOP suits, as they get settled into the grueling weeks ahead.

The actual series begins June 1 with the Casino Employees event. The popular return of the $565 buyin Colossus II kicks off on June 2.