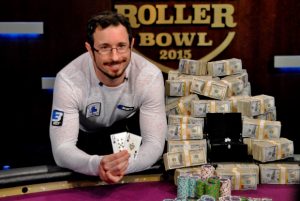 Now the network has announced the return of the event for 2016.

Last year’s tournament featured a $500,000 buy-in, with Brian Rast claiming the title and the $7,525,000 it came with. POKER PROductions and well-known producer Mori Eskandani produced the historic event and will do so once more this year.

The tournament will kick off on May 29th at the Aria Resort & Casino in Las Vegas once again, and will conclude June 1st.

But there won’t be a $500,000 buy-in this year. Instead, participants will have to pony up a mere $300,000 to enter. Only 49 participants will be allowed to sign-up. Poker Central CEO Clint Stinchcomb explained that the tournament won’t only feature top poker pros in a press release.

“With 14 of the seats being reserved by Aria for their non-professional, super high rollers, that only leaves 35 seats for other players,” he said. “As interest has already built up, we expect to sell out quickly.”

There won’t be an invitation list for the remaining 35 players. It is first-come, first-served. Possible participants include Daniel Negreanu, Phil Ivey, Scott Seiver, and, of course, last year’s champion Brian Rast.

Like last year, the tournament hosts won’t be taking a rake. All buy-in money will go into the prize pool. On top of that, sponsors will be chipping in an extra $300,000 to the pot.

The first edition of the Aria Super High Roller Bowl ended with Rast defeating Scott Seiver in an epic heads-up battle. The two pros went back and forth for quite some time before Rast eventually won.

Seiver held a 2:1 chip lead when heads-up play began, and even increased that lead during the match. But on the 173rd hand of the final table, Rast won a race to finish off the tournament. Seiver went home with a more-than-consolable $5,160,000.

Other players in the tournament included Phil Ivey, Daniel Negreanu, Phil “OMGClayAiken” Galfond, Antonio “I Can’t Hold It” Esfandiari, and Bobby Baldwin. There was a mix of top poker pros and wealthy businessmen in the tournament.

Last year’s Aria Super High Roller Bowl was televised on the NBC Sports Network and Poker Central. Television details for the 2016 edition have yet to be announced, other than that the tournament will be produced by POKER PROductions.

do they play 7 handed tables ( or less ) all the way thru in this tourney ?