Three unique Aria High Roller tournaments this past weekend on the Las Vegas Strip saw more than $3 million in prize money awarded to some of the game’s best players. 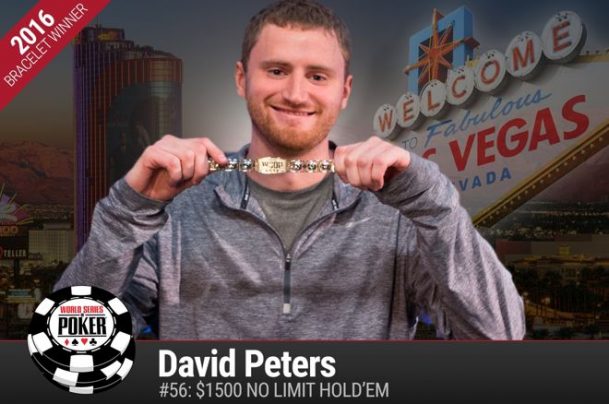 Whoops, he did it again, and again: 2016 WSOP bracelet winner David Peters had a heck of a weekend in the Aria High Roller tournaments, taking second and then first in two events.  (Image:  wsop.com)

Aria Resort and Casino is one of the only casinos in the world to host regular high roller events. Over the past two years, the resort played host to a $500,000 and $300,000 buy-in Super High Roller Bowl. Monthly, the Aria poker room holds high roller tournaments ranging from $25,000 to $100,000.

This past weekend, many of the best and brightest in the poker world ascended upon Las Vegas to compete for big bucks. David Peters, a regular in these events, had a Fedor Holz-like weekend, winning one tournament and finishing 2nd in another. In total, the Ohioan grossed over $800,000.

“If You’re Not First, You’re Last”

Peters may have taken Ricky Bobby’s (Will Ferrell) famous quote from the movie Talladega Nights to heart. His 2nd place finish on Saturday just wasn’t good enough, in his own mind, for the man who now has $14 million in lifetime live poker tournament winnings.

On Sunday, he entered the $50,000 Aria Super High Roller along with 29 other players and claimed 1st place ($511,970). It’s unknown exactly how much of those winnings he’ll actually be taking home. On Twitter, Peters said he chopped part of it with runner-up Erik Seidel. And of course, everyone gets to “chop” with the Internal Revenue Service to some degree.

“Momentum is no joke. I won the Aria 50k last night!! Chopped a lot of it hu with @Erik_Seidel and was able to get the W. The heater is real,” Peters posted after claiming victory.

Ali Fazeli, who lives in Las Vegas, has become a regular in these Aria high roller events. A lesser-known player internationally, Fazeli is a feared tournament player. On Friday, he took town the $25,000 Aria High Roller 45 for $403,200, his third title since June.