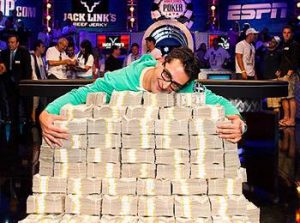 Antonio Esfandiari may have $27 million in career earnings but he’s still signed on the dotted line with a prominent backing site, StakeKings. (Photo: WSOP)

Antonio Esfandiari has worked his magic once more by securing a sponsor deal with the StakeKings.com website. As part of the deal, “The Magician” will be selling stakes in his live action as well as acting as brand ambassador for the site.

StakeKings allows players to buy shares in top-name pros, as well as learn tips and strategy via the site’s training program.

StakeKings offers customers a roster of staking packages in its ‘MarketPlace’ online.

Buyers can choose from a selection of pros or semi-pros, and buy or bid for shares as little as 0.1 percent of pros’ action.

It only launched in 2016 but has already doled out a small fortune to backers in winnings from its horses.

Brian Rast alone, one of StakeKings’ listed pros, amassed around $1.5 million at the summer’s World Series of Poker. Elsewhere, Jonathan Little managed five cashes and a final table for a haul of around $55,000.

While the likes of Rast, Little and Hunichen are draws for any backers savvy to the value that can be developed from online tournaments, capturing Esfandiari is a real coup.

An ever-present on TV shows like Poker After Dark and High Stakes Poker, the popular American is one of the second generation of pros that still commands an audience.

Esfandiari has amassed over $27 million in live career earnings, helped in no small part by his 2012 victory in the inaugural Big One For One Drop. The $18,346,673 first prize catapulted The Magician to the top of the all-time money list (he’s since been deposed by Daniel Negreanu and Erik Seidel).

Although he almost certainly had backing in that $1-million buy-in event, his share of the prize cash would have been considerable.

Esfandiari has gone on to score further major cashes, including another final table at 2013’s $111,111 One Drop High Roller ($1,433,488) and a 13th-place score in this year’s One Drop event at the World Series. StakeKings will be hoping his celebrity pull brings in plenty of backers, casual and serious alike.

Despite being one of the game’s true celebrities, Esfandiari has tended to shun the big names like PokerStars and Full Tilt.

The Iranian-born pro has preferred wild card sites like Victory Poker, with whom he was associated with pre-Black Friday.

The US-facing poker site was known for its aggressive marketing campaign, strip poker PR stunts, and abundance of models promoting the website.

Ultimately, after a move to the Cake Poker network, Victory closed its doors shortly after PokerStars and Full Tilt had theirs shut for them in America.

The flamboyant head of the firm, Dan Fleyshman, was “emotionally done” with online poker after the DOJ raids that decimated the industry in the USA.

Another Victory Poker alumnus, Jonathan Little preferred the staking route, and Esfandiari seems to have found a natural new home for now.