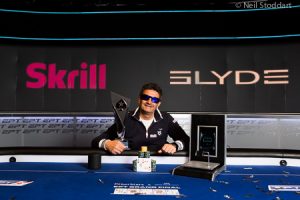 Italian Antonio Buonanno had his eye on an EPT title for years, playing numerous European Poker Tour tournaments. And on May 2, he captured victory in the most prestigious of all EPT events throughout the year by winning the Grand Final Main Event. And he was awarded in kind with €1.24 million ($1.72 million) in cash, a SLYDE watch, and a trophy with which to commemorate the occasion.

The 47-year-old Italian is a professional poker player, but it couldn’t have been easy to outlast younger pros at the near-record final table. He held up to the 310 hands and 17 hours of play, including a historic heads-up match against Jack Salter. Buonanno was one happy winner.

The second full day of play brought back 347 surviving players with Hendrik Latz as the overall chip leader. A few new players joined the fray, pushing the tournament total to 650 players and the prize pool to €6.5 million ($9,016,150). The top 95 players would be paid from that lot, with €1.24 million ($1.72 million) reserved for the champion. That day ended with 123 players and Vladimir Troyanovskiy in the chip lead and Antonio Buonanno in 34th place.

Moving into the Money

Day 3 started with 123 players, but quickly moved into the money portion of the tournament. Players like Salvatore Bonavena, Sam Trickett, Philipp Gruissem, and Igor Kurganov exited before play stopped with 41 competitors bagging their chips. Malte Moennig was the chip leader, and Buonanno was in the bottom ten.

Day 4 thinned the field to only 17 players, as players like David Williams and Scott Clements exited along the way. Buonanno chipped up throughout the day and finished fourth on the leaderboard, while Kenny Hicks led the way with a significant chip lead.

The final table was then set for May 2, with Salter holding 5.17 million chips and the lead, followed by Mayu Roca with 4,625,000 chips. Magnus Karlsson was a bit behind with 2,595,000, and Buonanno was next with 2,065,000 chips. Kenny Hicks was next, followed by Sebastian von Toperczer, Malte Moennig, and short-stacked Sebastian Bredthauer with 755K.

Salter quickly doubled through Buonanno and then eliminated Bredthauer in eighth place. Buonanno was able to eliminate Hicks in seventh place, and Moennig took care of von Toperczer in sixth. After Karlsson exited in fifth, play continued until the dinner break, at which point Salter was still leading, but Buonanno was in second chip position.

Heads-up play began with Salter in the lead and dominating. Buonanno took the lead, but Salter grabbed it back. Buonanno suffered and was eventually reduced to only a few million chips. But he doubled to nearly five million, doubled again soon after to nearly 9 million, and then took over the lead with another double. Salter kept the stacks nearly even for a while, but Buonanno stayed aggressive. Salter was the one in trouble, and on the 311th hand of the final table, Salter moved all-in with K-7 of diamonds, and Buonanno quickly called with A-4 offsuit. The board delivered J-9-2-Q-3 without enough diamonds, and Salter took second place.

Buonanno hurried to his wife in the audience for a congratulatory hug, and the two celebrated the long-awaited victory together.