The twin island country of Antigua and Barbuda has been fighting American online poker issues for 13 years now. 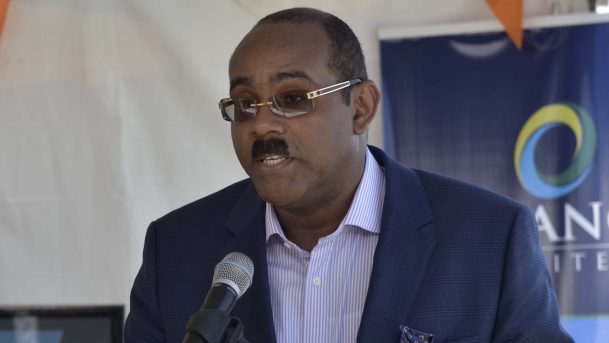 Antigua’s Prime Minister Gaston Browne doesn’t like the United States online poker stance, and feels the US owes his country millions. But can he really do anything about it?  (Image: antigua-barbuda.com)

The US government has made attempts that date that far back to prevent its citizens from accessing online poker sites that operate out of the Caribbean sister country islands.  The countries have cried that the economic hit they suffered as a result has had dire effects on their economies.

Back in 2013, Antigua’s Finance Minister Harold Lovell decried the American stance, saying, “The economy of Antigua and Barbuda has been devastated by the United States government’s long campaign to prevent American consumers from gambling online with offshore gaming operators.”

With the World Trade Organization (WTO) on its side, the island-nation has for three years sold items off of websites that American interests say infringe on copyrights. The federal government was quick to respond to the matter, telling political news site The Hill at that time that, “The United States will not tolerate theft of intellectual property and will take whatever steps are most efficient and effective to prevent this from happening.”

Unless you are expert in international trade and copyright infringement laws, this twisting tale is complex and circuitous in its unfolding. In short, the WTO summoned up international trade treaty GATS (General Agreement on Trades and Services) back in 2003 as a comeback for US policy, essentially siding with Antigua and Barbuda. With the States as a paid WTO member, in theory, that should have been the end of it. But it wasn’t.

With the US entrenched, and positioning sanctions on the Caribbean country to the tune of $21 million per year, a 2007 ruling by the WTO’s Dispute Settlement Body opened the door for a potential recouping of those losses.

We’re Not Gonna Take It Anymore

Prime Minister Gaston Browne isn’t going to let the issue go and just write off the money. He wants to force the US to pay all or some of the estimated more than $200 million he claims his country is owed.

Initially, the US offered a settlement that was scoffed at by the government of Antigua and Barbuda. Browne felt the offer was offensive.

“We will never accept any one-sided agreement in which they treat us with contempt, and in which they fail to settle the issue in meaningful manner. We’re hoping that as a result of that proposal we’ll be able to come to a mutually satisfactory agreement,” Browne told the Antigua Observer earlier this month.

A counter offer is expected soon, possibly this week. Browne would like the US to reconsider, and put an end to this 13-year dispute. Should the feds refuse to come to a fair agreement, the prime minister claims he will take harsh action.

In September, Browne is scheduled to visit the United Nations in New York. If at the time of his visit the US continues to “utilize their might to trample on a small state,” he will stand up for his country and attempt to expose the US for its bullying tactics.

“As far as I’m concerned, that is the single issue which I will want to raise at the UN if they continue to treat us with this kind of contempt . . . perhaps they’re going to consider Antigua & Barbuda as a nuisance,” the prime minister said.

But Can He Back It Up?

Despite his blustery tone, one might wonder exactly what Browne intends as Antigua and Barbuda’s comeback plan if the US fails to comply, which is probably the likely outcome. But as it turns out, the country does have some possible options. In yet another complex and difficult to understand twist to this story, a 1994 Agreement on Trade Related Aspects of Intellectual Property Rights (TRIPS) could apparently cause issues for intellectual property holders. Exactly what those issues would be were not clear to this reporter, however.

Antigua and Barbuda claim that the WTO should be the ultimate arbiter and determiner of “fair” practices. But whether the country can really do anything that would even somewhat impact a nation with hundreds, if not thousands, of times the trading power of the two islands seems, to say the least, highly dubious.