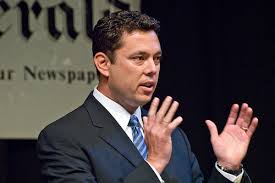 Anti-online poker advocate and Sheldon Adelson ally Jason Chaffetz (R-Utah) is out of the Speaker of the House Race. (Image: samuel-warde.com)

Jason Chaffetz (R-Utah), the man who acted as co-sponsor of the Sheldon Adelson backed Restoration of America’s Wire Act (RAWA) bill, has pulled out of the race to become Speaker of the House.

At the start of October it came to light that anti-online poker supporter Chaffetz was seeking to replace the current incumbent, John Boehner.

Having made his alliance with Adelson and his contempt for online poker clear at every attempt, news that Chaffetz may become one of the most powerful figures in American politics was certainly cause for some concern.

However, Chaffetz was always viewed as the short stack in the race and few gave him a realistic chance of winning.

Fortunately, that fact is now irrelevant as the Utah representative has formally declared himself out of the race.

After announcing the decision to his colleagues, Chaffetz then took his announcement to Twitter.

“@jasoninthehouse: I am out and supporting @RepPaulRyan for Speaker. Right person at the right time,” wrote Chaffetz.

Despite throwing his support behind Ryan, it’s not yet clear whether he will join the Speaker of the House race.

Ryan Bad but Not as Bad

Although Ryan isn’t much of an online poker fan either, he is certainly less of an opponent than Chaffetz.

Moreover, with no direct allegiance to Adelson, it’s highly unlikely that Ryan would make a bill such as RAWA top of his priority list.

After news of Chaffetz demise reached the US iGaming community, the Poker Players Alliance (PPA) was moved to comment, calling it “great news.”

However, while the PPA was buoyed by the news, other members of the US poker community were less enthused and made their views clear via Facebook.

“Chaffetz would quite possibly be the nut low. So it may just be a trade but it still is (slightly) better,” Devin Porter.

“While both may be down on poker – it’s unlikely that Ryan will make bringing RAWA up for a vote a priority – whereas Chaffetz might have brought it up on Day 1 just to appease Adelson…,” David Gladstone.

“Thank god that clown decided to get out. Sure that pissed Uncle Sheldon off. Another one of his puppets has fallen,” Michael Perry.

Regardless of whether or not Ryan will be as anti-online poker as Chaffetz is unclear; however, it’s certainly not bad news to see the Utah Republican step back into the shadows.