Anthony Zinno bagged the biggest stack, thanks in part to a fortunate cooler, by a large margin heading into the World Series of Poker Europe Main Event final table. He’ll be joined by four other talented players including Dario Sammartino, the WSOP Main Event runner-up this past summer. 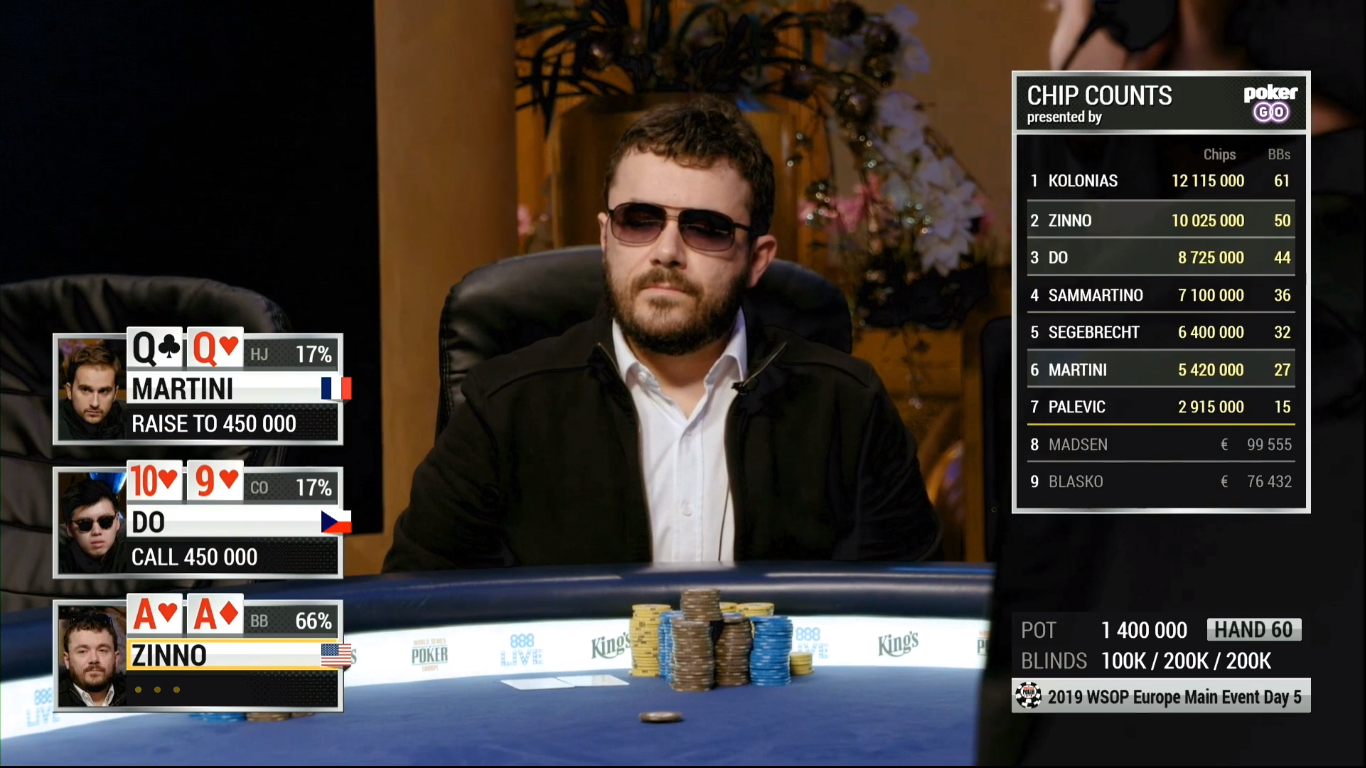 Julien Martini, the PokerStars PSPC runner-up in January, bubbled the official final table. The Frenchman went home with €132,017 for sixth place, certainly a nice payday. But not nearly as much as he would have won – €1,133,678 – had he shipped the bracelet.

Anthony Zinno is already one of the best poker players in the world. He has over $9 million in career cashes and has been one of the most consistent performers in World Poker Tour history. The two-time bracelet winner just might be one day away from becoming the first player ever to win three WSOP and WPT titles.

Zinno has 16,845,000 chips in the WSOP Europe Main Event. That puts him in the lead, well ahead of Alexandros Kolonias, who is in second place with 12,150,000. Zinno was the beneficiary of a lucky cooler that sent Martini home on the official final table bubble. The chip leader picked up pocket aces in the final hand of the day against Martini’s pocket queens and won a pot of 12.5 million chips.

Do is the only local player remaining in the field which began with 541 players. The WSOP Europe series is hosted at King’s Casino in Rozvadov, Czech Republic.

Anthony Zinno certainly isn’t the only superstar at the final table. Dario Sammartino is another top-notch poker player who is earning the respect of the poker community.

Sammartino finished runner-up to Hossein Ensan in the WSOP Main Event this summer, winning $6 million, and also has an additional $8.1 million in lifetime cashes. But he still has yet to win a bracelet despite 40 career cashes at the World Series of Poker. He could, however, be a day away from finally owning one of those coveted gold pieces of jewelry.

Another poker superstar, David “ODB” Baker, was among the chip leaders heading into Wednesday’s Day Five. But he lost two huge races and was eliminated in 12th place for €59,759. That left Anthony Zinno as the lone remaining American in the field.

You can catch the final table action on Thursday live on the PokerGo app beginning at 9 am ET.

I hope Zinno can take the title . Good work in any case . I wish I could play like him ; I cant even cash in a 9 handed sng at the microstakes !