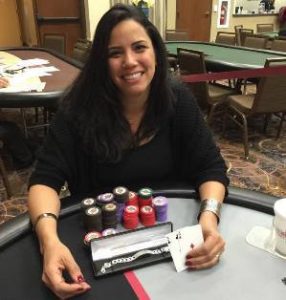 Angela Jordison made history with her three-tournament takedown at the Wild Horse Resort and Casino in Pendleton, Oregon. (Image: onlinepoker.net)

Like all poker players, Angela Jordison knows that winning a tournament, especially one in the live arena, isn’t easy, so when she scored three wins in a row, she knew her place in poker folklore was set.

Jordison’s trio of wins in the Wildhorse Poker Roundup Series over the last few days was something every poker player would be proud of, regardless of the stakes.

We were delighted to speak with Angela after her win and got some exclusive comments on her victory for CardsChat.

“I have been around the game a long time, and I’m very social, so I get to know a lot of people. I play a lot of PLO8 cash now, and used to be a regular in the 5-10 NL games.

I met a lot of NW players that went on to do big things in poker from those games, i.e., win bracelets, WSOP final tables, and [became] regulars in the big games in Vegas.

I learned a lot from [other pros I know] and many took me under their wings and would give me tips and coaching. I listened to everything they were teaching me, and tried to integrate it into my game. Some things worked for me, some things didn’t,” she told us.

After getting the low stakes poker series underway late last week, the Wild Horse Resort & Casino in Pendleton, Oregon, kicked off its annual festival with a $100+$10 No Limit Hold’em freezeout.

Three Times the Charm for Jordison

That win gave the seasoned grinder a $10,828 bankroll boost and the confidence to ante-up in Event #2 for $200+$15. Another 447 couldn’t stop the poker mom from garnering another trophy and $18,348 after beating Roger Jensen heads-up.

With two wins secured and a place in poker folklore on the horizon, Jordison anted up yet another $200+$15 to take part in Event #3, a No Limit Hold’em shootout. This time she managed to outlast 214 opponents, including Brent Sheirbon heads-up, to take home her third trophy and another pocketful of cash.

In total, the Redmond, Oregon native netted a cool $33,490 before her hot streak game came to an end in Event #4.

The win of just over $30,000 gets added to Jordison’s previous total live tournament haul of $48,356, which definitely puts her on the map as a contender.

“I wanted to thank everyone again for your support over the last few days. It has been an amazing experience and I don’t take it for granted one bit. I love the game of poker and have made some amazing friends along the way. This is a once in a lifetime run to win three in a row and I’m just trying to enjoy it,” Jordison wrote on Facebook.

Praise from the Pros

Among the chorus of congratulations that have rung out for Jordison, LAPT champion Cater Gill offered his praise, while bemusedly chiding his fellow grinder to “step up” after failing to cash in Event #4. Taking the bait, Jordison ran with the comment, and defended her play in the event with a dose of humor.

“In my defense it was limit Omaha and I’m under the age of 70, so it doesn’t have my interest yet. I might have yawned 500 times in the 4 hours I was in the tourney,” Jordison wrote.

Regardless of her performance in Event #4, Jordison’s performance has managed to capture the imagination of the poker community, and with the World Series of Poker on the horizon, she’ll be hoping she can parlay her success into a bracelet. We asked Jordison about what games she expects to play at the upcoming World Series this year.

“I’m playing the Colossus, and will probably go back for the PLO8 events. That was the plan all along, even prior to these wins.

My daughter is leaving in the fall for college, and I will have an empty nest. It’s been my goal to really have a great summer with her before she goes, so poker will have to work around that. I have learned over the years that poker can be so consuming that it can take over all parts of your life. I’ve learned balance, and even though I’m thrilled over my wins, I don’t want that to change.”

We asked Angela if she had a choice, would she rather the three wins, or a no-notoriety WSOP cash event win this summer.

“I would take winning a bracelet over the three wins, obviously. But, if it was just winning a side event, I would take making history. While I was winning these tournaments, I didn’t realize the magnitude of what was happening. I was so focused on trying to beat fatigue and keep going that it didn’t all hit me until I got home.”

Of course, with her recent track record of success, there’s no reason Jordison can’t hope to add a WSOP bracelet this summer to her existing poker tournament success record.

“I love the game of poker so much, and I’m happy I left a little mark on it,” Angela told us with a smile.

What a great accomplishment! Looking forward to what she will do during WSOP!

I have played with Angela at the Wildhorse a few times and not only is she a force to be reckoned with, but she is incredibly friendly and composed at the tables. Win, lose, or draw she is always at the “fun table” where people are smiling and having a good time. She brings a lot more to the game than just her skills.