Irish poker pro Andy Black may no longer be the international star that he once was, but that doesn’t mean his skills have diminished, as he recently proved by posting a win at the Dublin Poker Festival. 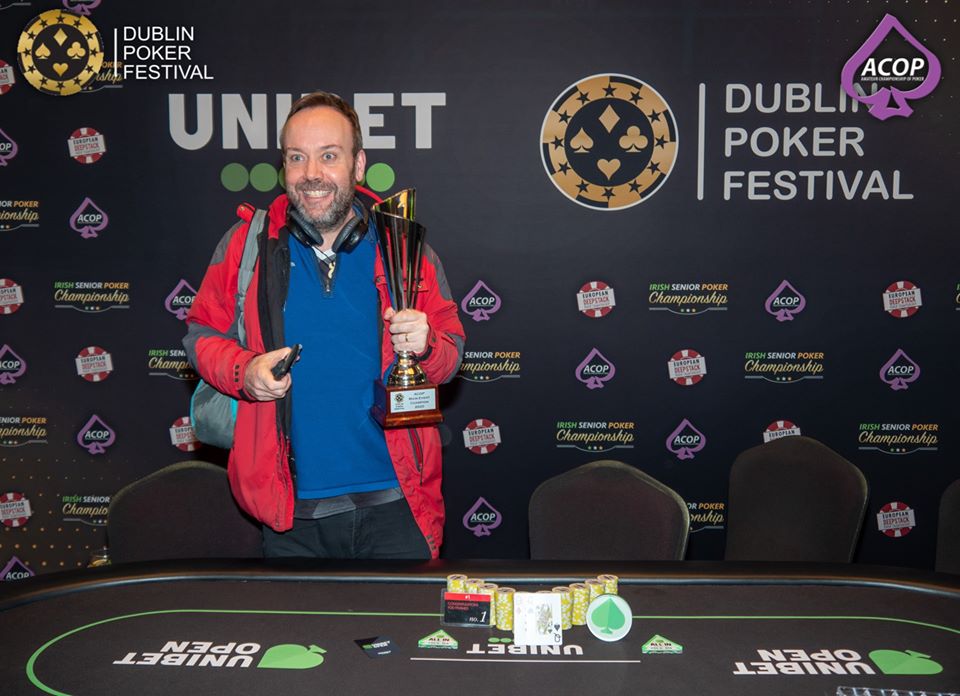 Andy Black notched another win in his native Ireland by taking down the Dublin Poker Festival APOC. (Image: D4 Events/Facebook)

The Irish pro was once a permanent fixture on shows such as the Partypoker Premier League.

This exposure, combined with success at the World Series of Poker (WSOP), made Black a star of the game in the early noughties.

However, after taking a step back from the spotlight, he’s found a niche in Ireland.

This week, Black joined 616 players at Dublin’s Bonnington Hotel for the €230/$248 Amateur Championship of Poker (ACOP).

Although Black is a seasoned professional, the allure of a €123,200/$132,930 prize pool was impossible to ignore. While the payout may be far smaller than what Black played for in the 2005 WSOP Main Event, the thrill of competition didn’t prevent him showing the he’s still got some of old moves (see video below).

Despite his vast experience, Black still needed a dose of luck to secure the victory. With seven players left, he called an all-in from Ciaran Burke. Black tabled A-J and called for some help after Burke showed A-K.

Fortunately for Black, a jack on the turn was enough to steal victory from the jaws of defeat. That elimination sent Burke to the rail in seventh, and gave Black enough momentum to kick on.

In the end, Black cut a three-way deal with Igor Matias and Sean Foley. With everyone guaranteed just over $16,100 each, Black stepped on the gas.

After Matias fell in third, Black edged out Foley to win the Dublin Poker Festival APOC. Black claimed the trophy, and added another $19,580 to his $4.8 million in live earnings.

In addition to booking his 13th live win, Black’s performance earned him his 21st cash finish in Ireland since 2015.

Of course, the $1.7 million he won for finishing fifth in the 2005 WSOP Main Event is Black’s crowning glory.

Even at the recreational level, poker is tougher than it used to be in the early noughties, and many of the pros that were famous when Black was a star are now nowhere to be seen. Black, however, is still a force to be reckoned with, even if it is on a slightly smaller scale that it used to be.

It is a little unfair for a professional player to play against amateur players, but what matters is the experience gained playing against a professional