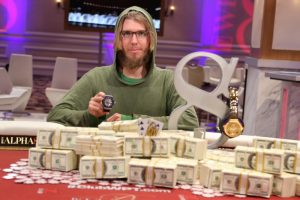 Andrew Lichtenberger is following in Phil Galfond’s footsteps. The poker pro has launched the Beta version of a play money poker site, and has plans to create a real money version down the road in countries where online poker is legal (hint: not in the United States).

The site, Luckychewypoker.com, is named after his online poker moniker, ‘Luckychewy,’ Galfond announced similar plans earlier in the year but has yet to get a site going. Luckychewy.com is currently open for business in Beta mode.

Lichtenberger, like Galfond, has plans to offer more than just poker games. Lucky Chewy will provide poker training sessions and a social community.

As it stands, only play money games are available. No date has been set on when the real money portion of the site will be launched.

Lichtenberger hasn’t spoken publicly on his specific plans for his new business venture.

“LuckyChewyPoker is a provider of online games and entertainment. Our online system has been tested to ensure a fair experience for all players,” was quoted on the website.

Lichtenberger, now 29 years old, got his start playing poker online. He was a big winner who then shifted to live poker games. Lucky Chewy has been featured on many televised poker events.

This past summer, he won his first WSOP bracelet in event #52, the $3,000 No-Limit Hold’em Championship. He also cashed in the Main Event (499th place).

Lichtenberger has more than $8 million in live tournament winnings throughout his career. Although arguably his most prestigious win came at the 2016 WSOP, his biggest score was for 1st place in the 2014 WPT Alpha 8’s ($1.7 million. Lucky Chewy bested a final table that included Tom Marchese, Brian Rast, and Bryn Kenney.

Away from the table, he’s a firm believer in the power of yoga. In fact, he wrote a book called ‘Yoga of Poker’ to share his story of self-discovery.

LuckyChewyPoker.com will have a team of pros training aspiring poker players. The pros on staff have yet to be announced.

Poker players will be able to enter daily tournaments once the real money poker site goes live. Some of the tournaments planned include a daily 6:00 pm 6-Max Showdown and Daily Bounty Bonanza.

The site also plans to offer a Luckychewy’s International Poker Series (dates and buy-ins have yet to be announced).

A “Coming Soon” note pops up when attempting to join the Poker School. There isn’t any information available on specific classes or poker coaches. For now, the main purpose of the website (real money poker and poker training) remains in the planning stages.