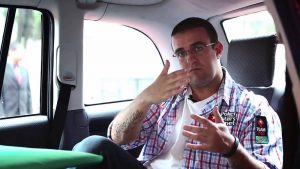 Brazilian pro Andre Akkari appears to have redefined the notion of poker sponsorship after securing a deal with sportswear brand Puma.

Akkari may have just over $1.5 million in live tournament winnings, but he’s been a high profile player for more than a decade thanks, in part, to his deal with PokerStars.

Acting as one of the company’s major brand ambassadors across South America for the best part of a decade, Akkari has become a bona fide superstar in his native Brazil.

Much like Daniel Negreanu and Phil Hellmuth have crossed over into the mainstream thanks to their prowess at the poker table, Akkari is now a figurehead for the game in his country of birth.

In fact Akkari’s star power outside of poker is so great, he was selected to carry the Olympic torch for the Rio 2016 Olympics.

Joining other Brazilian legends such as supermodel Adriana Lima and former World Cup Winner Zagallo, Akkari not only flew the flag for Brazil but the poker community as well when he lifted the Olympic torch.

This fame and notoriety has ultimately led to a new sponsorship deal with Puma. Announcing the news via his Instagram page, Akkari expressed his happiness at the new deal and welcomed Puma to the world of poker.

Although poker players have represented brands outside of the industry in the past, Akkari’s deal is by far the most significant.

Puma is a major name in the sporting world and the fact it’s chosen Akkari to be a member of its team could have hugely positive effect on the industry.

Unlike poker sites sponsoring sports stars such as Cristiano Ronaldo and Neymar Jr. in a bid to breach new demographics, this is a mainstream brand actively wanting to promote poker.

A New Way for Poker to Shine

As yet the details of the deal haven’t been released, but there’s a strong chance that Akkari will feature in various forms of print and TV advertising for the company across South America.

The connections between poker and sports have often been touted by industry insiders, but if a brand like Puma is helping to promote the poker community, then it could easily lead to more people looking at poker in a new and positive light.

In addition to promoting poker in a whole new way, Akkari’s deals could also open up more opportunities for high profile players.

Congrats Andre Akkari on your sponsorship deal. You are doing good for the game & promoting it.
Good job.