Boris Becker might be making moves in the poker world at the moment, but it seems his one time rival Andre Agassi is the real pro when it comes to reading tells. 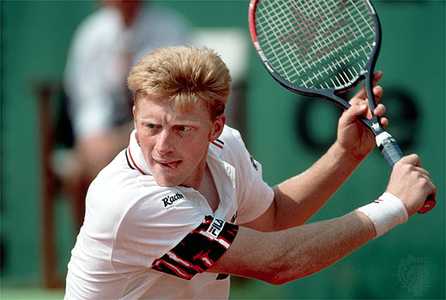 According to a recent article by Fox Sports, former tennis star Agassi would read the movements of Becker’s tongue before he served.

Talking to Unscripted about his rivalry with Germany’s Becker, Agassi said that he studied hours of video footage in order to get the edge over his opponent.

After losing three matches, Agassi reportedly became obsessed with beating Becker and turned to a trick poker pros use to outplay their opponents.

Eventually, after watching Becker’s movements for any tells, he noticed the three-time Wimbledon champion’s tongue moved in the direction he was going to serve.

“Becker beat me the first three times we played because he had a serve the type of which the game had never seen before,” Agassi told Unscriptd.

According to Agassi, each time Becker would serve, he’d stick his tongue out. If his tongue was to the left, the serve was going wide, but if it was central the ball would be coming down the middle of the court.

While many would have written such a theory off as superstition, the results speak for themselves. Once he’d discovered the tell, Agassi was able to beat Becker and, by the time the two tennis pros retired, the former had notched up ten wins (to Becker’s four) over his rival.

Agassi Should Have Turned Pro

In fact, as tough as it was to spot the tell, the most difficult part of the process was keeping his read a secret. Just like a poker pro will keep their opponent’s tells under wraps, Agassi had to vary the way he played so that it didn’t become obvious he knew where the serve was going.

So, by moving in the wrong direction at certain times, he was able to keep his secret safe and, therefore, stop Becker from altering his game.

Since the two tennis pros retired, they’ve both moved in different directions. Although Agassi had a brush with Nevada Gaming Control Board after a Las Vegas restaurant he part-owned filed the wrong paperwork, it’s Becker who has become the poker player.

Just before Christmas, the amateur signed up to become the latest brand ambassador for partypoker. With just over $111,000 in live tournament earnings, Becker is certainly no fool when it comes to poker.

However, given his penchant for picking out tells, it does make you wonder whether Agassi should have been the one to transition to poker while Becker headed for the kitchen.

Hellmuth won enough money at first to keep his buyins going, nice to have that ‘edge’