Americas Cardroom Targets Another Record as Venom Returns in January

Americas Cardroom will capitalize on one of its most successful years by starting 2022 with another record-setting Venom event. 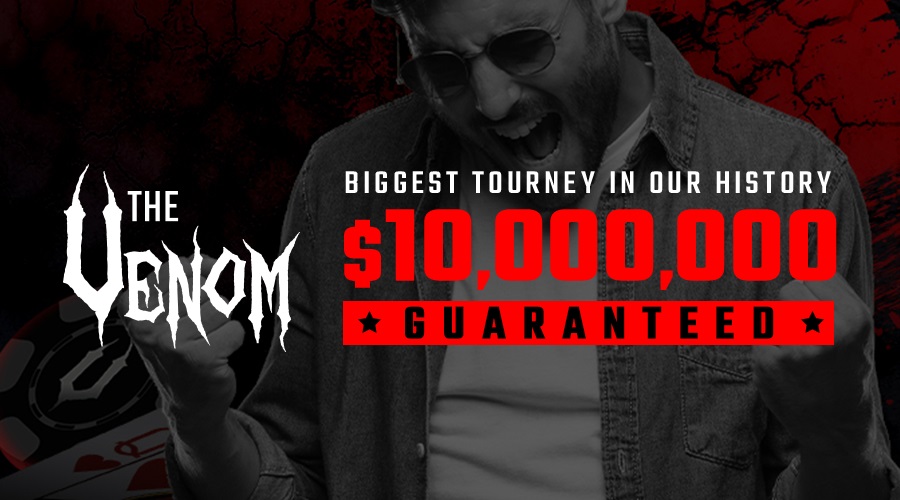 The American-facing poker site enjoyed a huge amount of success with its flagship tournament franchise in 2021, and will kick off the new year in style with a $10 million showdown.

Venom VI will get underway on January 21 with the first of four starting flights. From there, the field will be whittled down to a winner who will bank at least $1 million on Feb. 2.

As it’s been since the first Venom in 2019, the buy-in is $2,650, but Americas Cardroom is offering players a variety of ways to enter for less. Satellites and freerolls are already underway, and players will also be able to reduce their liability by using the staking feature on Americas Cardroom.

This is the first time players have been able to get backing for Venom or, conversely, buy a piece of someone’s action. The Winning Poker Network, on which Americas Cardroom operates, guarantees every staking deal.

Players have the option to sell pieces of their action and, if they’re a verified player, charge a markup. Americas Cardroom launched its staking feature in October, making it the second site — after GGPoker — to do so.

Venom loses some potency, but still full of bite

In addition to giving players the chance to offset their costs, staking could generate more interest in the event. The fifth incarnation of Venom was a success, but it fell short of its $10 million guarantee.

Americas Cardroom had been riding high after Venom IV and the launch of a PKO spinoff. However, despite continued interest in the franchise, Venom V was 70 players short of its breakeven point. Although a $170,000 overlay in an event offering $10 million is far from a disaster, it’s something Americas Cardroom will want to avoid in January.

Barring that misstep, Venom — and Americas Cardroom — thrived this year. Venom’s $10 million guarantee was the biggest prize pool by an American-facing poker site. Add to this the signing of Chris Moneymaker and Vanessa Kade, and Americas Cardroom has every right to be confident heading into 2022.