Americas Cardroom is rolling out its second Venom MTT of 2021 and, this time, it’s going to be a record-breaker. 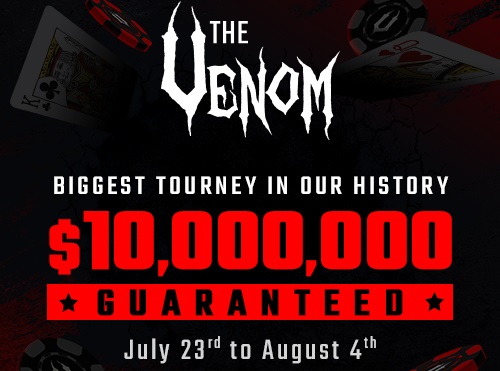 The announcement comes just a week after the site’s CEO, Phil Nagy, found himself in hot water over a controversial comment. Water may still be passing under that bridge, but the tournament team at Americas Cardroom isn’t letting this hold them back. The fifth installment of Venom will be the biggest ever thanks to a $10 million guarantee.

The next Venom event begins on July 23 with four starting flights before three additional days of action bring the tournament to a close.

Direct entry costs $2,650, but Americas Cardroom is running a series of freerolls and satellites in an effort to surpass January’s record-breaking event.

Venom IV started with an $8 million guarantee, but eventually paid out $9.4 million after attracting 3,774 entries. PORKONOMAR walked away with the title and $1.1 million on that occasion, but the next champion could win more.

Venom V will become the largest MTT by a US-facing poker site thanks to its $10 million guarantee, surpassing all four previous Venom prize pools. In line with this, Americas Cardroom is guaranteeing that at least two players will win $1 million each.

MTT could be an antidote to social media venom

Those are all positives and, owing to the venom flying around on social media, they’re positives Americas Cardroom could use right now. In addition to ongoing software issues, the US-facing poker site was the talk of Twitter last week after an off-color comment by CEO Phil Nagy.

The sexual remarks directed at poker player WeePro83 during a Twitch stream appear to have been made in jest. However, many viewers felt it was over the line. Nagy has since apologized, both in public and in private. He’s also vowed to learn from the incident, promising to change his own behavior and to make Americas Cardroom a safe space for everyone.

Given Venom’s recent success, the forthcoming tournament was always likely to be bigger than the previous event. And, while boosting the guarantee to $10 million won’t necessarily distract from the site’s recent troubles, the added value, coupled with Nagy’s apology, could go a long way toward repairing the site’s public image.