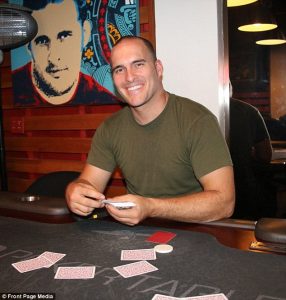 Erik Audé: From Hollywood extra, to convicted drug smuggler and back again, via the WSOP. (dailymail.co.uk)

Erik Audé, the Hollywood bit-part actor who in 2002 was arrested in Pakistan on drug-smuggling charges, has opened up to PokerNews about his unusual poker education.

Audé didn’t learn to play Texas Hold’em for pennies around the kitchen table like the rest of us, but in the dark confines of one of Pakistan’s most violent prisons. And he credits the game for helping him survive the ordeal.

Audé was building up a lucrative acting career in the early 1990’s, with small roles in hit movies such as Dude, Where’s My Car?, while also working as a fitness instructor.

But his life was temporarily snatched away from him when he was duped by a conman into smuggling drugs out of Pakistan.

Believing that he was transporting leather goods for one of his fitness clients, Audé jumped at the chance to travel the world and was soon making runs to exotic places like Istanbul to bring back apparently legitimate merchandise.

However, he was unaware that he was being set-up.

On a trip to Karachi, Audé was stopped by customs officials who found 8lbs of opium in his bags.

He was taken to a police cell where he was beaten and tortured with electric shocks into confessing to a crime he did not commit.

Audé could have faced the death penalty for his “crime,” but mercifully he was sentenced to seven years in one of the country’s toughest prisons.

He may have been an unwitting drugs mule but he was no witless poker donkey, and poker, he says, was his salvation, as he told PokerNews in an interview.

“I was placed on death row because it was probably the safest place to keep me at the time,” he remembers. “There were other prisoners there, and they played Texas hold’em poker a lot. A man named Murad spoke a little English and he would end up becoming my friend.”

“He taught me how to play. We’d buy in for five Pakistani rupees [worth about a nickel], and play with chips and worn down playing cards. Tournament poker was the preferred style of play because not too many people had enough money to play a cash-style format. The money would be used to buy food. Chicken, yogurt, drinks, etc., and we’d play for that.”

“People in that prison were always hungry, so winning some chicken or good food was a treat, and they would play their asses off.”

Audé’s poker prowess eventually allowed him to become a “kingpin” type figure, and his winnings earned him respect of other inmates, and the guards, who he could bribe for special compensations.

“For a good year and a half every guard was working for me. I was doing poker tournaments, hosting dinner parties,” he told the Daily Mail in a previous interview.

In 2004, Audé was released early following an appeal by the New Mexico governor, and now he has his life back on track.

As well as becoming a successful restauranteur, he has landed roles in American Sniper and Sons of Anarchy. He also started his own poker school, and regularly plays on the tournament circuit, finishing tenth place at a WSOP bracelet event in 2012.

“Going to jail has made life so much more basic for me,” he says. “I don’t need to succeed in life. I can work at McDonald’s and be happy. I really could.”

When I read text like this, with poker and Iraq in the same article I can’t not remember the famous movie with Matt Damon and George Clooney, ”The four kings”. Don’t know why but probably it’s because of the constant pursuing for happiness.