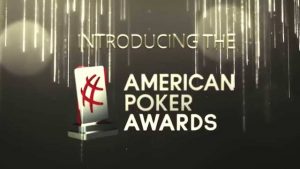 The first American Poker Awards go down this Friday in Beverly Hills, a gala recognizing extraordinary accomplishments in the poker industry. CardsChat is a media partner of the event. (Image: americanpokerawards.com)

The American Poker Awards will hold its first-ever ceremony on Friday, February 27th, not in a casino or even in Las Vegas, but at the swank SLS Hotel in Beverly Hills.

“This is the beginning of a yearly tradition, celebrating the best in poker in Canada and in the USA,” Global Poker Index (GPI) CEO Alexandre Dreyfus said.

GPI has produced the European Poker Awards for more than a decade, with its 14th edition planned for March, but Dreyfus felt now was the time to recognize the North American poker network in a more formal manner.

With many of the biggest names scheduled to be in attendance, and key poker-related companies putting their names behind the event including sponsor PokerStars and media partner CardsChat, the night is sure to go down as nothing short of historic.

Now that the Oscars are behind us, it’s time to honor poker and the stars who made 2014 unforgettable. Thirty-five nominees are vying for nine awards, with a jury panel making the final decision on a winner the morning of the show. A 10th accolade is also up for grabs, Poker’s Best Ambassador, an award decided by online social media voting that will also be presented on Friday.

Print out the nominees, challenge your friends, and discover who’s truly the biggest poker insider among your group. Categories and nominees are as follows:

GPI Player of the Year

GPI Female Player of the Year

Breakout Player of the Year Nominees:

Tournament Performance of the Year Nominees:

Poker Innovation or Initiative of the Year Nominees:

Charitable Initiative of the Year Nominees:

All In Magazine: Mark Newhouse
Brad Willis “Stages” and “Never Stop Fighting”
PokerNews at the WSOP
Jason Somerville for Run It UP!

Media Person of the Year Nominees:

Industry Person of the Year Nominees:

To be chosen by fans

February 27th is going to be a full day for poker’s elite. The GPI Poker Conference: North America summit gets underway at 8:30 AM that morning. This separate event will run all day, leading up to the American Poker Awards.

A who’s who of the poker industry will be in attendance, including Rational, bwin.party, WPT, EPT, and Ivey League, to name a few.

During the conference, speakers will discuss a variety of current issues, from the challenges facing live poker in the digital era to harmonizing the future of live and online play. The session will conclude with a “Players’ Perspective,” with a panel of top talent professionals, including Daniel Negreanu.

Editor’s Note: Be sure to read our exclusive interview with event host Kara Scott in CardsChat tomorrow.