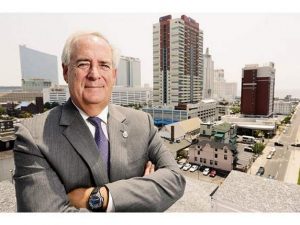 David Rebuck implies that PokerStars entry to New Jersey market is by no means a done deal. (Image: njbiz.com)

PokerStars’ delayed entrance into the New Jersey market is merely a matter of due diligence, David Rebuck, director of the New Jersey Division of Gaming Enforcement, said this week.

In an interview with the Global Gaming Business podcast Rebuck explained that the $4.9 billion purchase of PokerStars and Full Tilt by Amaya was under particular scrutiny.

“It was a big transaction,” he explained. “We’ve done 80 sworn interviews, we’ve travelled to half a dozen foreign countries…”

Rebuck made no mention of recent rumors that the granting of Amaya’s license is imminent or of Amaya CEO David Baazov’s declaration last week that he believed PokerStars would be in New Jersey by the end of September.

Instead, he emphasizes that a license for Amaya is by no means a done deal. “Amaya is an applicant here and we’ve engaged in a very thorough, comprehensive, detailed review, not of Amaya but of the Amaya purchase of PokerStars and Full Tilt,” he said.

“We’re going to do this in a very professional way which will be published to the world, because whatever decision we come down on will be scrutinized, and some will hate it and some will love it.

“It will be done in a way that I can, through this division, have pride in saying this is accurate,” he added.

“One way or the other it will be precedent-setting.”

These words contradict the assertion of Senator Raymond Lesniak in October 2014 that the matter was now in the hands of New Jersey governor Chris Christie. Lesniak had suggested that PokerStars entry to the market was a matter of “weeks not months” before implying that Christie was stalling.

Rebuck’s only previous statement on a possible timeframe came in November 2014 when he said that early 2015 was the “most optimistic” assessment of a decision.

The following month Amaya’s offices were raided by Federal Canadian police and provincial financial market regulators, as part of an investigation into suspicious trading activity in the lead up to the acquisition of PokerStars and Full Tilt.

Amaya’s rapid rise in stock in the weeks prior to the acquisition announcement suggested something was going on behind the scenes. And meanwhile, rumors of the takeover were being reported in the gambling press a full three weeks before it was publicly made official.

Amaya has repeatedly said that an internal investigation has found no evidence of wrongdoing on behalf of any of their employees, and that no allegations from the AMF have been forthcoming.

However, it seems probable that the investigation has delayed the company’s passage into New Jersey.